EURUSD is in a clear upward trend since the beginning of the year. From January to last Friday, the increases reached 660 pips, which gives an average of over 100 p per week. It seems, however, that the coming week may be the beginning of the correction, and this is signaled by the formation of the Bearish Engulfing on the daily chart. In the case of continuing the move to the south, the nearest support level, which the price can face is 1,2300, there is also an accelerated upward trend line (blue dotted).

At this round 1,2300 level, the rebound is likely to take place and it will be worth taking a look at the behavior of the pair, because its effective defeat can lead to further declines even to the next support set by the maximum from the first days of January – 1.2090.
This is obviously a scenario for the next few weeks – and you have to keep in mind the upcoming elections in Italy (4.03.2018) – where the Populist Party of Five Stars – strongly eurosceptic – comes to the lead, which may mean much more confusion than we had to deal with in France, thanks to Marine Le Pen. It will certainly affect the volatility on EUR dependent pairs and as we continue with the results of the surveys, we can witness unpredictable, nervous movements on EURUSD. 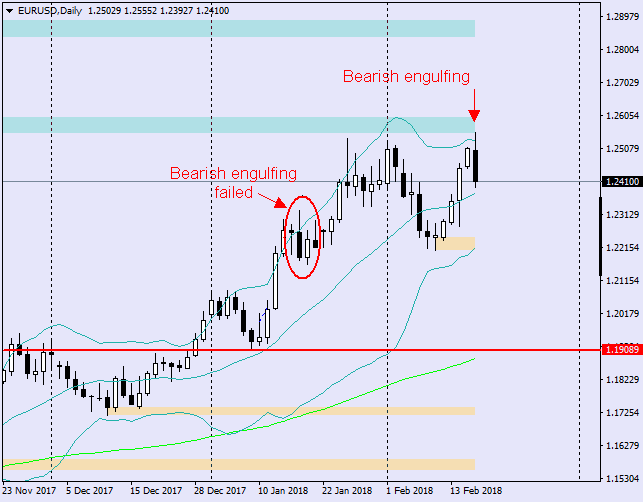 Also, it must be remembered that not every Bearish Engulfing has to bring declines … As you can see in the attached picture quite recently we had such formation on the same pair, the daily candle was opening over the Bollinger band, that is everything was theoretically correct, and … there were no declines, the price went to the north ignoring our obvious bearish formation.

Another point of view …

Looking at the graphs in terms of EMA144 strategy, we can see that on H1 the pair follows the rules of the strategy fairly well and after breaking the EMA144 (A) goes south testing the broken average from the bottom. At point B, we see how the average is overcome and the price continues to move up, and the re-test of the average (green arrow) ended back above the average and the pair returns to increases. Currently, the price is at the level of EMA144 and basically here we should get a hint as to what will happen next with the EURUSD pair. If the average is successfully overcome, the downward scenario will start to be implemented and you can bet on downside to 1.2300 first support. 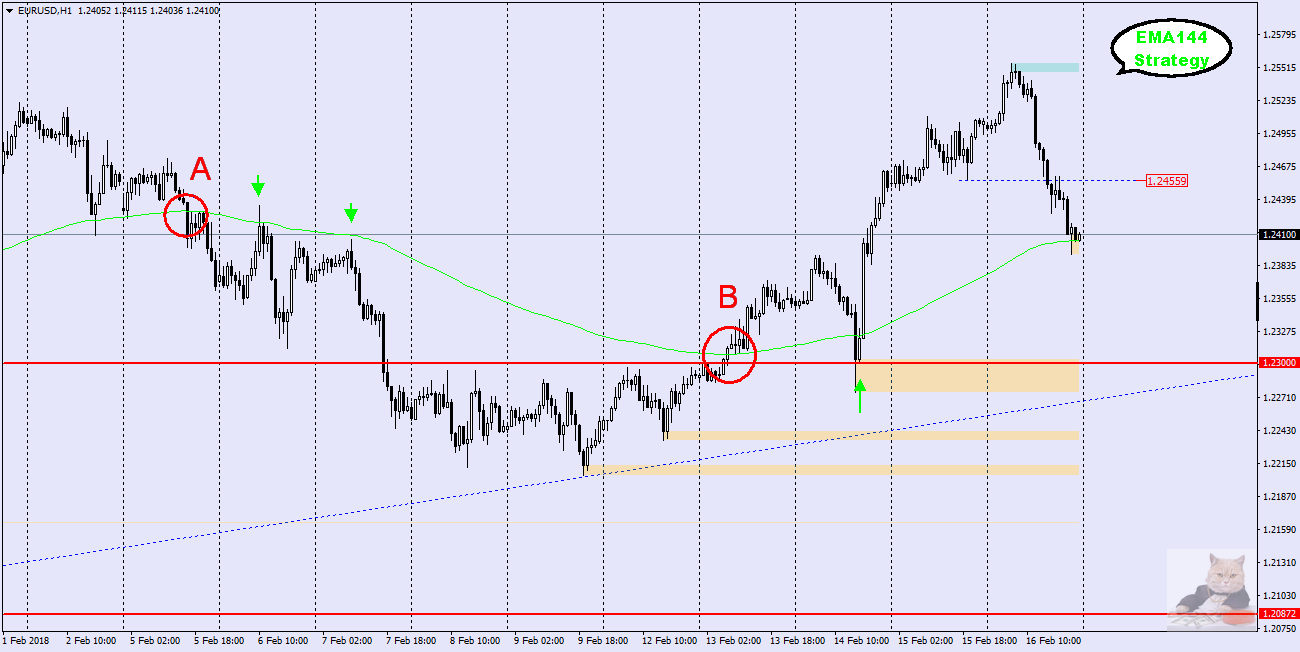 If, however, the average is defended, a good place to look for the short will be 1.2450, which has already been negated twice last Friday.

To sum up: taking into account both analyses, i.e. Price Action and Strategy EMA144 – I am on the bears side in the short term. Only breaking the 1.2450 level can change my point of view, because we have to keep in mind the long-term trend, which is clearly bullish, lasts from the beginning of 2017, and the pair made 2,300 pips during this time.