Business cycles in the economy are characterized by fluctuations in business conditions usually over several years. We can distinguish two phases of the business cycle in the simplest diagram: phase of the expansion and phase of the recession.

Phase of the expansion will be characterized by an acceleration in economic growth, a drop in unemployment, a moderate increase in inflation.

Phase of the recession will be characterized by a slowdown in economic growth, more precisely negative GDP readings for at least two quarters in a row, rising unemployment, deflation.

This simplified diagram shows how economies experience cyclical cycles on a regular basis. In the United States, the average time of economic expansion lasts about 4 years, and the recession is less than a year. However, by the mid-eighteenth century, there was no downturn in the economy, of course there were worse times, for example during the wars, but overall the economy was growing moderately.

In the mid 18th century during the industrial revolution and primarily due to the emergence of central banking, cyclical fluctuations in the economy began to occur.

Central bank and its influence on the market 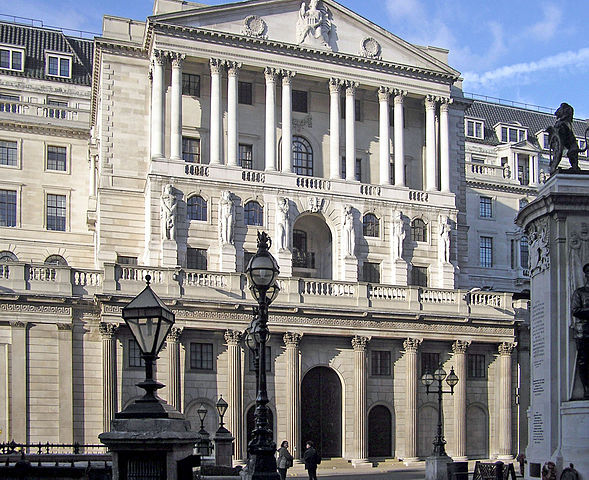 The first central bank was established in England in 1694 (Bank of England). At present almost every developed country has its own central bank. The main task of the central bank is to stabilize prices, usually at 2%. This is achieved through changes in money supply. In turn, the money supply is regulated by the level of interest rates, open market operations, changes in reserve requirements.

Easy money supply growth is possible because now the economies are based on fiduciary money, ie not covered in any bullion, for example in gold. Central banks along with commercial banks can literally try to print money to reach the inflation target. Why, however, banks want inflation to be a few percent, usually around 2%. Because in the current economic doctrines, the dominant belief is that stable price growth will guarantee faster economic growth. During a steady rise in prices, companies are motivated to invest and the economy is growing. In turn, deflation, at least when it is too long, is bad for the economy, as it hampers investment and consumption, since both investment and consumption will be postponed for the future, and eventually will be cheaper in the future. Excessive inflation is also not beneficial to the economy, as it causes unreasonable behavior for consumers who, in fear of rising prices, begin to buy excessively, leading to speculative bubbles. Mainly responsible for economic policy are, at least officially, such opinioners.

What does the central bank do to stimulate the economy and thus inflation? Yes, as mentioned above increases the money supply, and more specifically stimulates credit. In fact, it is not the central bank directly raising money supply, but commercial banks, which are starting to give more and more loans encouraged by the central bank’s activities. Let’s say that commercial banks provide loans out of nothing, because the deposited funds in the bank only need to have a small part in the form of reserve requirement with the central bank. For example, Jan Kowalski comes to the bank “Saving Money” and deposits in it 100 USD. The mandatory reserve in USA is 3%. This means that the bank can grant credits for about 3333 USD! Credit growth, the amount of money in the economy, the prices go up, money is the same product as any other when we increase it’s supply, we lower it’s value, businesses encouraged by cheap credit are investing, sometimes in very risky projects. In other circumstances, they would not invest and the economy starts to accelerate until the central bank finally recognizes that the economy is overpriced and pushes the brakes, reducing the money supply, prices start to fall, some companies entering too risky investments begin to fall and appear recession. Then the central bank recognizes that the economy is going bad and you have to loosen monetary policy and the economy is accelerating again. All these activities are run by the same central bank!

The conclusion is that it is better to let the economy develop somewhat slower but steadily than to drift from expansion to recession. After all, deflation based on technological development is not bad and does not hinder economic development. Observed even in the IT industry, where the average personal computer is much more powerful than computers decades ago and most importantly much cheaper. Nobody because of falling prices have not stopped buying computers, because they will still be cheaper in a few years. On the contrary, the industry thrives.

One of the theories of why inflation-driven growth and credit expansion are being driven by an easier flow of capital from the middle and lower to the richest. In the end, who gets the most money? They are richer, usually the richest, and the poor and the middle class, who usually find out about the upcoming problems most often lose the most. Nota bene people learn about the crisis usually from television, which is also controlled by politicians and the richest. A lot of research shows that in the 21st century one percent of the population gathered wealth almost like the rest of the population 99 percent. These proportions have never been so unfavorable to the middle and poor class. The richest sectors are the financial and pharmaceutical sectors, whose representatives spend billions of dollars annually on lobbying in the US and EU institutions.

The Federal Reserve System (Fed) is a central bank in the United States that was founded in 1913 as a private bank on the initiative of John Pierpont Morgan, the founder of JP Morgan Investment Bank. The Fed consists of three basic institutions:

The Board of Governors consists of seven members elected by the president with the consent of the senate. The terms of office are 14 years and the president is elected for 4 years.

The FOMC consists of 12 members, 7 members of the Board of Governors and 5 representatives of the Federal Reserve Bank, who rotate rotating every year, except for the president of the New York Bank. The Board of Governors has a majority in the FOMC, and the Board members are chosen by politicians and their interest groups form monetary policy.

The Fed influences the market by:

Impact of the Federal Reserve on the capital market

What were the fundamental reasons for the bull run? The Fed in the third quarter of 2007 began successively lowering its interest rates, which it raised to over 5% previously, which contributed to the bursting of the subprime bubble, which in turn was due to the low rates of 2002 – 2004. But returning to the end of 2007 , The Fed started lowering interest rates that fell to zero around early 2009. It was a period of financial meltdown, the collapse of Lehman Brothers, and other major institutions such as AIG, Bank of America and many others were at risk of bankruptcy. The Fed in March 2009 introduced a QE (quantitative easing) program, precisely during this period began a bull market on Wall Street. The Fed bought from the banks treasury bonds and securities that nobody wanted to buy, such as MBS. The Fed in its first QE program pumped $ 1.2 trillion into the market, and yet QE2 was worth about $ 1 trillion and QE3 worth $ 40 billion. Some of this free money had to go to Wall Street and became the second largest bull market in history.