The GBP – the British pound seems to be under pressure recently, with the inevitable deadline for a trade agreement with the EU approaching. This agreement is to regulate the rules of trade between the two separate economic zones, which will become the EU and the UK after 1 January 2021.

How strong is the impact on the pound’s exchange rate the state of current trade talks, was signalled on Thursday by a sudden rise in the GBPUSD exchange rate (almost 100p within minutes) after the news that the head of the European Commission – Ursula von der Leyen – still sees an opportunity to sign an EU-UK trade agreement.

However, the time is running out, there are only a few weeks left to sign the agreement, the deadline has been set at 15.10.2020 and Boris Johnson does not intend to postpone this deadline.

Due to such a strong dependence of the GBP exchange rate on the conclusion of this trade agreement and the possible consequences of not signing it… I have decided to analyse only the technical side, the two currency pairs with the pound: GBPNZD and GBPJPY, leaving the fundamentals on the side.

Looking at the daily chart (D1) of the GBPNZD pair, we can see the H&S formation built for over a year. About 200p is missing to complete it.

The price is in the bearish engulfing pattern (bear outside bar). Breaking down may lead the price to the neck line of the mentioned H&S, which would be a good opportunity for sell orders. This bearish scenario may negate breaking up and changing the sentiment on MACD into bullish (green). So it is worth waiting for confirmation of the OB breakout to avoid the bear trap.

GBPJPY – Inside bar and two possibilities.

In the case of this currency pair, which is popular among amateurs of strong emotions due to its large daily ranges, I would be leaning towards the continuation of the dips initiated on September 1 this year. The condition for further declines is to overcome the lower limit of the Inside bar located at 134.25.

And here, similarly to the GBPNZD pair, only a break to the north and a change of direction of the MACD to an upward one will cancel the downside scenario. It is also worth noting that the price has recently left the growth channel and its support may now be a resistance to possible increases. 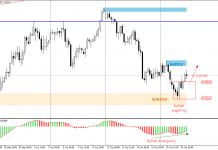 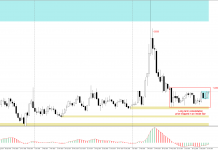 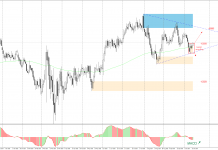 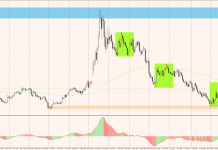 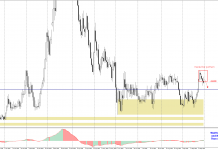