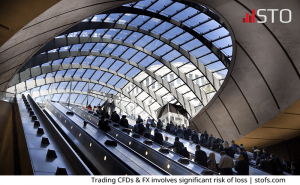 On Thursday March 29th 2018, the Office for National Statistics (ONS) will publish the finalized data regarding the United Kingdom’s (UK) Gross Domestic Product (GDP) growth in the fourth quarter (Q4) of 2017. The GDP’s growth is considered to be a broad measure of the UK’s economic activities and is taken into consideration by market analysts. The UK’s economy has been facing some problems as the uncertainty deriving from the Brexit negotiations is weighing on the economic growth.

Economists polled by Bloomberg said that they expect the UK’s GDP to have grown by 1.4%, on an annualised basis, in Q4 2017. On a quarter-to-quarter basis, market analysts are expecting the data to show that the UK’s GDP grew by 0.4%. The ONS had released its second GDP growth estimate for Q4 2017 on February 22nd 2018. The ONS report had revised lower the quarterly GDP growth. According to the ONS’ survey “the revision down reflects, in part, a small downward revision to the estimated output of the production industries.” If data shows that the GDP’s growth was stronger than anticipated, it could lead to the strengthening of the British Pound against its competitor currencies. If the GDP’s growth comes in lower than expected, the impact on the Sterling could be negative.

On March 22nd 2018, the Monetary Policy Committee (MPC) of the Bank of England (BoE) decided to keep the Bank’s benchmark interest rate unchanged at 0.5%. Analysts were expecting that the decision would be taken with absolute majority, however this didn’t happen with Ian McCafferty and Michael Saunders, who are MPC’s members, unexpectedly voting in favour of a rate hike. The last time that the BoE had decided to increase the rate was in its monetary policy meeting in November 2017.

The MPC statement published on March 22nd 2018 said that “given the prospect of excess demand over the forecast period, an ongoing tightening of monetary policy over the forecast period will be appropriate to return inflation sustainably to its target at a more conventional horizon.” Deutsche Bank’s analysts noted in their report, released on March 23rd 2018, that “broadly speaking, the tone and language of the minutes was in line with market pricing for a May 2018 hike.”

Gertjan Vlieghe, who is one of the MPC’s members, said at a Confederation of British Industry (CBI) event, on Friday March 23rd 2018, that the BoE’s benchmark interest rate would need to rise once or twice each year in the current tightening cycle. Gertjan Vlieghe had voted in favour of hiking the BoE’s rate in November 2017, despite the fact that he belonged to the team that didn’t want the immediate tightening of the Bank’s monetary policy.

On Tuesday March 27th 2018, the BoE published the records of its Financial Policy Committee (FPC) meeting. The FPC stated that progress has been made in mitigating Brexit risks. The records showed that the FPC is considering possible forms for the future relationship between the UK and the European Union (EU) countries for financial services. The FPC also acknowledged the problem that UK firms may not have the necessary permissions to provide services after Brexit.

STO and the British Pound

The British Pound is one of the major currencies that STO clients can trade with. Traders can take advantage of the STO’s Forex variety and choose from over 30 currencies when trading. STO provides its clients with educational courses to help them encounter the various trading challenges.