Home Brokers Admiral Markets Trading Breakouts and Reversals at Support and Resistance in Forex and CFD...

Have you ever entered a trade setup and wondered why price action almost immediately turned against your position?

Support and resistance (S&R) must’ve been the cause of this sudden reversal.

Today’s article explains how to analyse and interpret the S&R within the market structure. It also reviews how to trade breakouts and reversals.

Price Reactions in the S&R Zone

Price action has to make a ‘decision’, or a reaction when it approaches support and resistance:

Traders can judge which scenario is more likely by analysing the charts, and I will share my best guidelines for S&R analysis and trading. 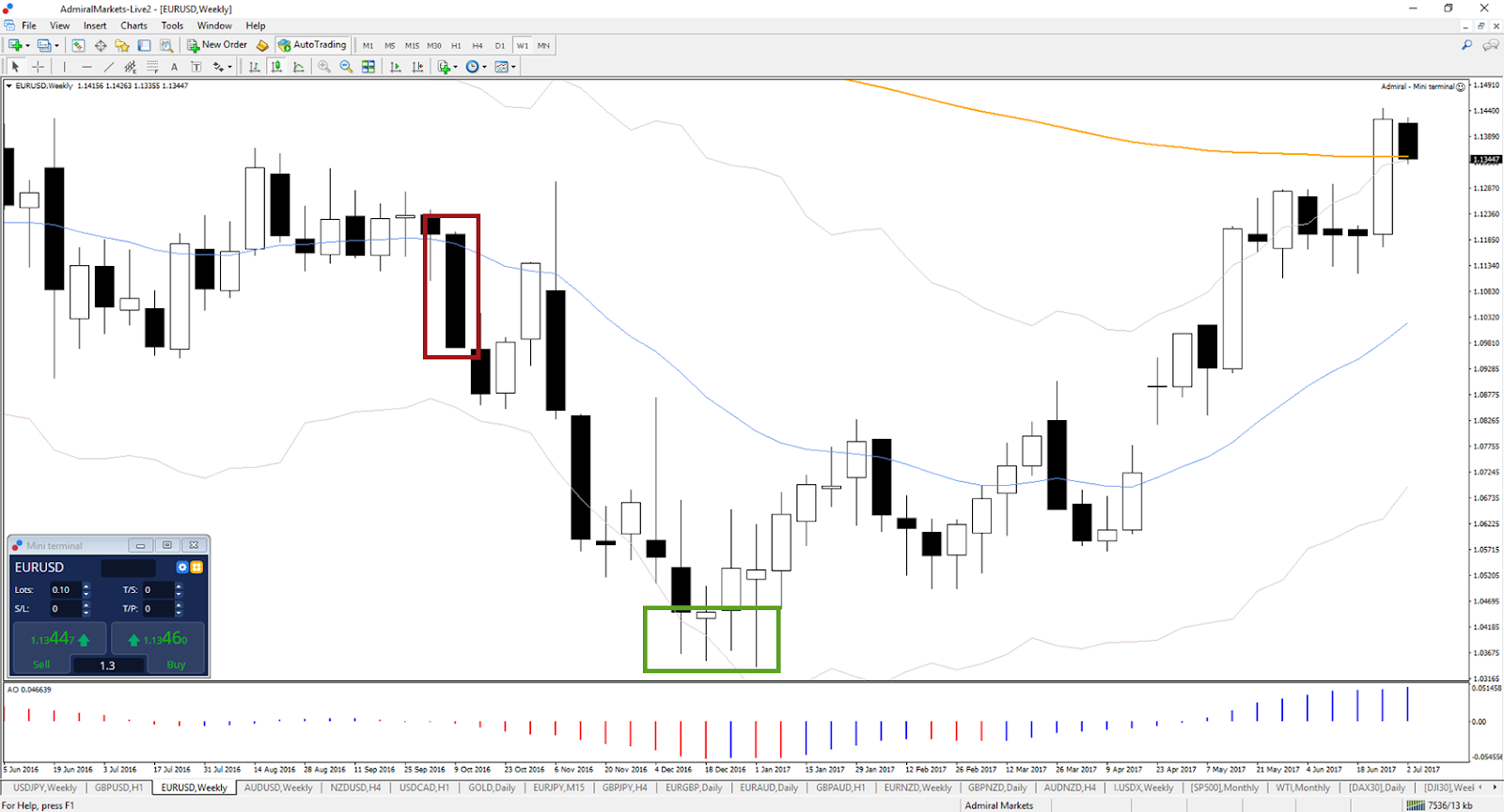 Source: The EUR/USD weekly chart, June 2016 to July 2017, the green box indicates a bounce at support and the red box, a bearish break out after a consolidation (sideways move).

The main equation I use is this:

The balance between the two factors will decide whether the price will break or bounce. Here is how the equation works out:

In any case, you might be wondering how to measure both variables… A good question, which we will address in the next part.

Measuring the Strength of Support and Resistance

Let’s start with measuring the strength of support and resistance (S&R). Here are, in my view, the two most important aspects when analysing the potential strength or weakness of the S&R:

Points of confluence: The more tools and indicators that align at a price zone, the stronger the support or resistance becomes. The strongest areas have at least three reasons that confirm an S&R zone. The S&R is usually weaker when only one or two reasons are present.

For instance, a support level is strong if the price approaches a 50% Fibonacci level, the round psychological of 1.10, a weekly Pivot Point, and the bottom of Admiral Keltner indicator. 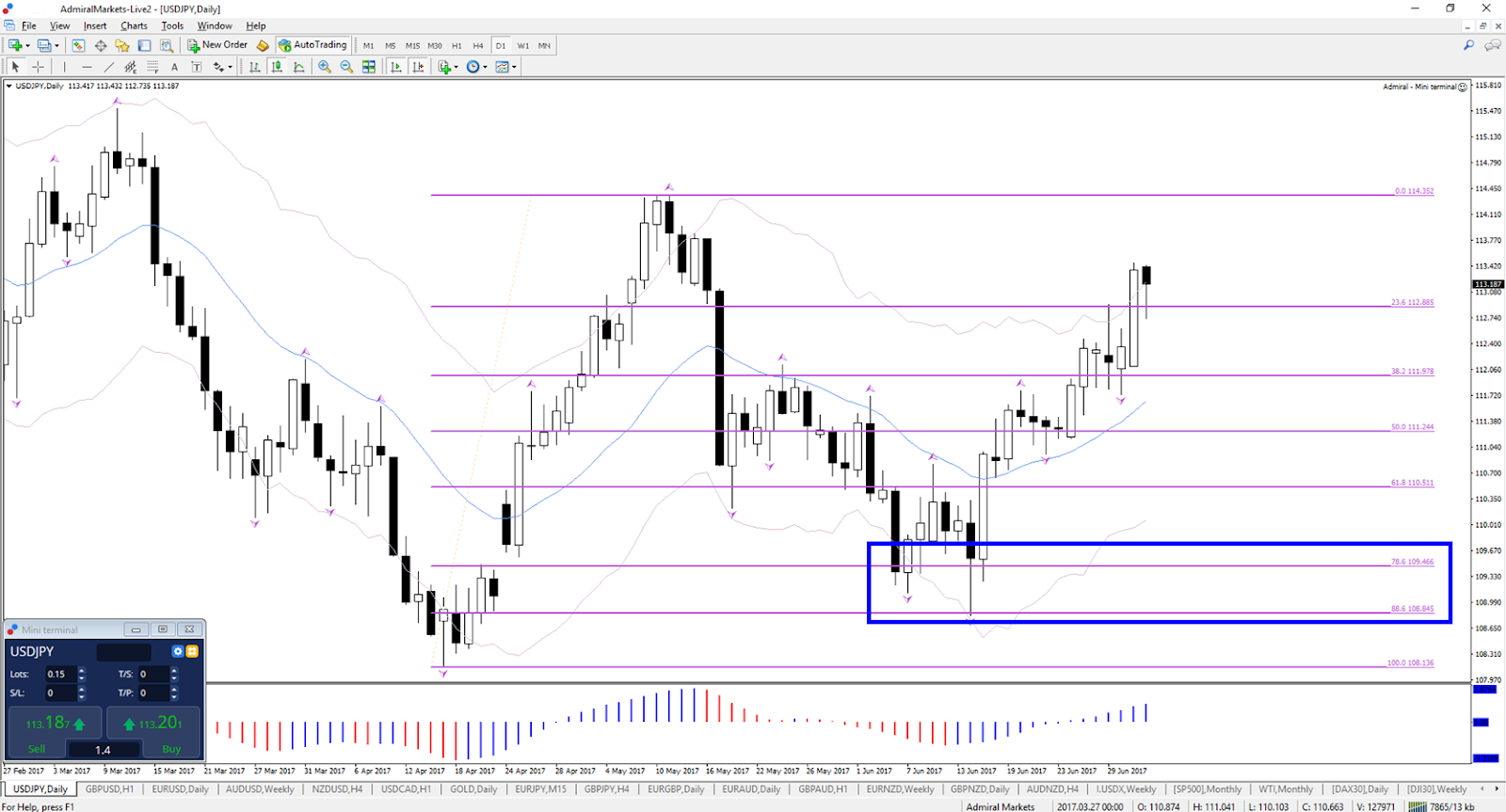 Source: USD/JPY, 27 February to 4 July 2017, showing multiple reasons for a bounce at support such as Fibonacci levels, bottom, and Keltner indicator.

Momentum and the Number of Approaches

The other side of the equation reviews momentum and price action, which offers two critical insights:

Momentum: Quick, impulsive price action is indicated by a few relatively large candles that mostly move in one direction and have candle closes around the candle high or low. Here is how momentum plays a role:

Number of approaches: The chance of a breakout varies depending on how often the price reaches the S&R zone. Here are the guidelines I use: 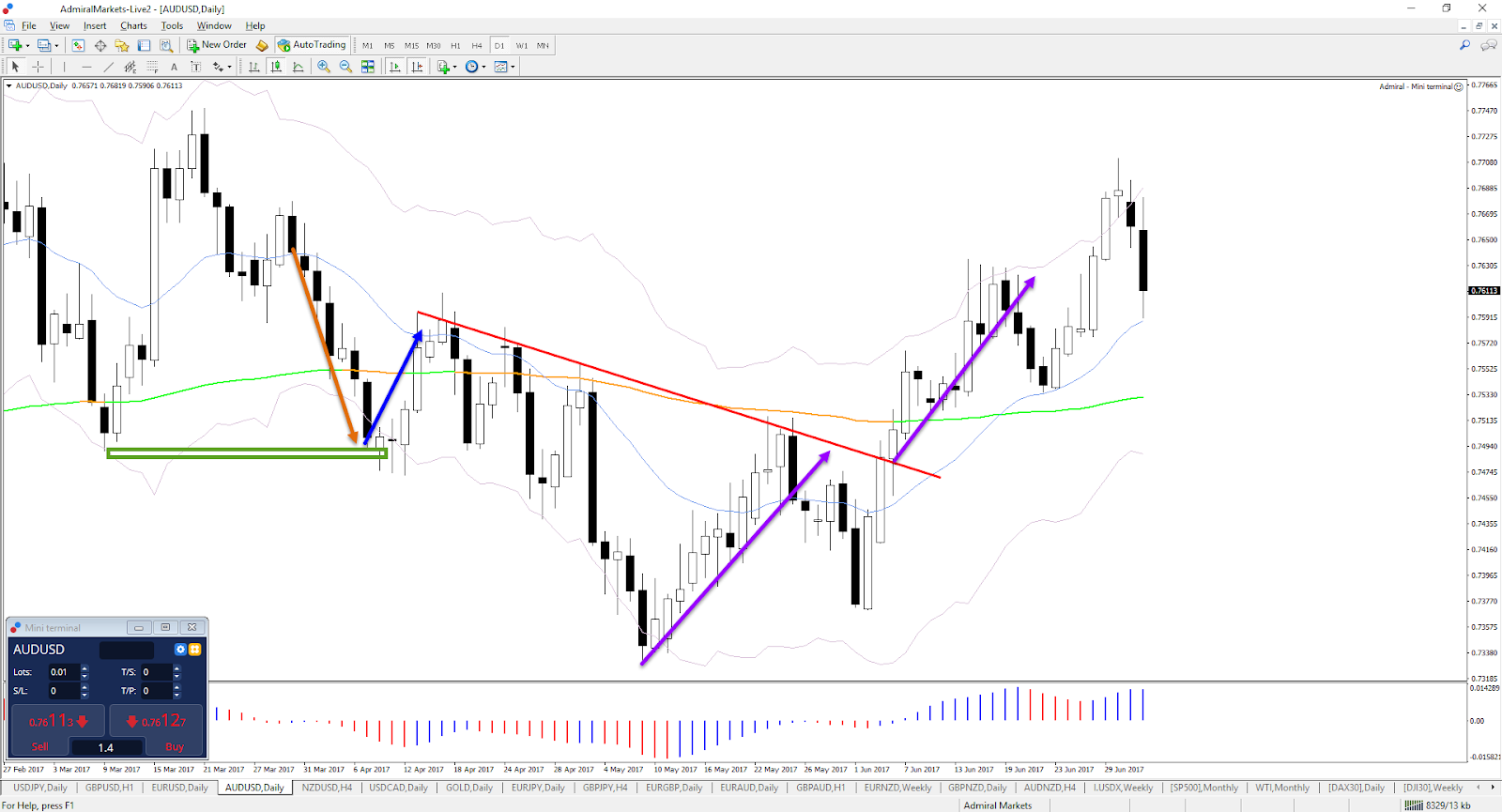 The above-mentioned equation is therefore as follows:

The balance between both sides will indicate the likely winner but there is another key factor that plays a vital role:

Momentum vs S&R equation indicates whether a bounce or break is more likely, but the candlesticks provide key information about how the price is actually responding.

By analysing momentum, S&R, and market structure in general I am able to identify whether I prefer to trade in a bullish or bearish direction and whether I am interested in a breakout or bounce. In some cases, I could even be interested in both.

Check the video below for more information on candlesticks.

For more articles, webinars, and information on trading, make sure to visit our main page at Admiral Markets.

Also, feel free to test Admiral Markets’ MetaTrader 4 Supreme Edition – a special plug-in with 60+ extra features to tackle the markets including a package of extra indicators.

One of the best S&R indicators is actually part of MetaTrader 4 Supreme Edition: the Admiral Pivot Point indicator. It’s a remarkable tool for spotting the S&R levels.

The most famous traders ever

Roisea Review: How to choose a trading platform for crypto trading?

Finartmedia Review: How to Choose the Best Platform for Forex Trading?

What is a Casino Wagering requirement?

HNWIs reassess their spending habits amidst the pandemic

FinoTrend: All You Gotta Know About the Best Trading Platform for CFD and Forex Trading