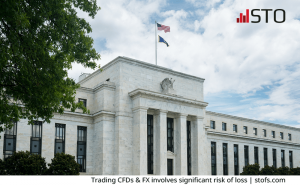 On Wednesday March 21st 2018, the Federal Open Market Committee (FOMC) of the United States Federal Reserve (Fed) is going to announce its decision on interest rates. The Fed’s Board two-day meeting started on Tuesday March 20th 2018 and is going to end with the post-meeting press conference the next day. This is the second FOMC meeting in 2018 with the next one scheduled on May 1st-2nd 2018.

Economists expect that the FOMC will decide to increase the Fed’s benchmark interest rate from 1.50% to 1.75%, which is 0.25% raised. If confirmed, this will be the first rate rise in 2018. During 2017, the Fed raised its borrowing costs three times, referencing an improving labour market and the US economy. Despite the correction in US markets that occurred in February 2018, US stock indices are near record-highs with analysts suggesting that only a market downturn could pause the Fed’s momentum in increasing interest rates.

Banks disagree on the number of rate rises in 2018

Economists at ING (Internationale Nederladen Groep) noted in a report published on March 19th 2018 that “financial markets are pricing in a greater than 90% probability that the Fed will raise rates 25bp [base points] on Wednesday 21st March 2018, and depending on which metric you look at, even a small chance of going up by 50bp.” ING’s economists stressed that investors and traders are going to focus on the Fed’s Summary of Economic Projections that deals with interest rates forecasts. According to their report, the last forecast assessment amongst Fed policymakers showed that the median expectation was for three rate rises. However, with Jerome Powell as the new Fed’s chairman, the probability for four hikes during 2018 has increased.

The Credit Suisse’s chief US equity strategist, Jonathan Golub, told Bloomberg reporters, on Friday March 16th 2018, that the Swiss bank doesn’t expect an additional rate hike beyond the anticipated three. Golub said that “I don’t think Jerome Powell has any incentive to disappoint the markets right now. The last jobs report showed that the CPI [Consumer Price Index] inflation risk was less than we might have thought. I don’t think we are going to get a punch in the nose from the Fed this week.”

Wells Fargo, one of the largest banks in the US, released in a report which it said that it has changed its 2018 forecast regarding benchmark interest rate rises. Wells Fargo’s analysts noted that “we changed our call from three to four hikes. We think they (the Fed) will do another 25bp [base points] hike. They acknowledged the economy is on a fairly robust path without too many signs of overheating.” Nomura, which is an Asia headquartered financial services group with an integrated global network, seems to share this opinion. Nomura’s economists wrote in a report, released on Friday March 16th 2018, that “based on recent remarks by FOMC participants, we think the dots distribution will shift up across the forecast horizon. We believe that the median forecast for 2018 will imply a shift from three hikes this year [2018] to four, but this remains a close call.”

Fed’s Governor Jerome Powell is positive about the US economy

The new Fed’s Governor Jerome Powell said in his first testimony before the US Congress in February 2018 that the US economy’s outlook has strengthened since December 2017. Nomura’s analysts suggest in their report that Governor Powell will repeat the same comments in the post meeting press conference, stressing that gradual interest rate hikes are supported by resilient economic data, fiscal policy changes and supportive financial conditions.

Economists told CNBC that the Fed’s anticipated interest rate hike could prove beneficial for the US Dollar which has lost value against its competitors because of the political instability in Washington and the conflict between the US and its trade partners. However, they also noted that the boost could be temporary if the talks about imposing tariffs on imported products materialize.

STO supports its clients with the latest market news updates, a comprehensive fundamental and technical analysis and an unparalleled client support, enabling traders to form a suitable strategy according to their needs. STO’s vision is to offer the most competitive trading conditions and an optimal trading experience to our clients.