Home Forex B2B Executives SEC is loosing one of his directors 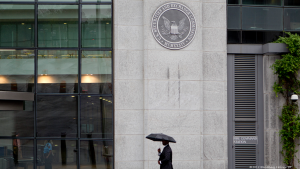 The Securities and Exchange Commission today announced that Walter E. Jospin, Regional Director of the agency’s Atlanta office, is leaving the agency.  Mr. Jospin will remain in his position until his successor is selected.

“Walter and I met many years ago and I was taken with his wisdom, expertise, and care.  He has brought those and many other fine characteristics to the Commission,” said SEC Chairman Jay Clayton.  “We all are grateful that Walter re-entered public service after a distinguished career in the private sector, and his contributions to the Atlanta office and the Commission have been exemplary.”

Since February 2015, Mr. Jospin has led a staff of approximately 100 attorneys, accountants, compliance examiners, and other specialists involved in compliance inspections and the investigation and prosecution of SEC enforcement actions in the Atlanta region.  Under Mr. Jospin’s supervision, the Atlanta office brought charges involving investment advisers, financial and disclosure fraud, insider trading, and those targeting retail investors, including:

Also under Mr. Jospin’s watch, the Atlanta office’s exam staff has increased collaboration with enforcement and generated substantial referrals, including those that led to several of the actions referenced above.

“Walter’s work to implement positive changes in Atlanta and across the national examination program will have lasting impact,” said Pete Driscoll, Acting Director of the Office of Compliance Inspections and Examinations.  “It has been a privilege to work with Walter.”

Mr. Jospin added, “Serving as Director of the Atlanta Regional Office has been an extraordinary opportunity, second only to working as an SEC enforcement lawyer early in my career.  Both experiences have given me the chance to work with smart, talented people committed to the Commission’s mission.  The SEC is an outstanding agency, and I will miss my wonderful colleagues.  It has indeed been an honor to lead the Atlanta office.”

Mr. Jospin joined the SEC from the law firm of Paul Hastings LLP, where he was a long-time partner in the Atlanta office with a practice focusing on securities enforcement, internal investigations, corporate transactions, and corporate governance.  Mr. Jospin previously worked in the SEC Enforcement Division from 1980 to 1983 in the Atlanta office.  He graduated from the Wharton School at the University of Pennsylvania and from the Emory University School of Law.