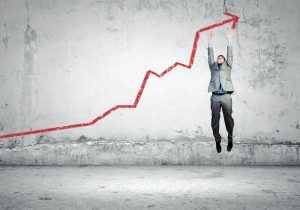 In the Foreign Exchange Market, the volume shows the number of lots traded in a given currency pair. One lot is essentially defined as 100,000 units of currency. This measure can be very helpful in determining the strength of the trend.

For example, everything else being equal, when a currency pair makes a notable upward move with a high volume, it is considered that the market is gathering strength on the upside. Because this move was supported by a significant number of traders and massive amounts of capital, most likely there was a great deal of conviction behind it.

Here it might be helpful to point out that not all upside moves present a bullish sign for a given currency. For example, if a Forex pair reaches new highs, but has a consistently decreasing volume, then it might be a sign that the moment is fading there are fewer people and capital supporting this trend. Consequently, as a result, we might see pullbacks and potentially reversal as well.

If the pair falls on increasing volume, then it is often considered as a sign of building up downward momentum and as a result, many experienced traders may turn bearish on a given security. On the other hand, if this move downward was accompanied by decreasing volumes, then this could signify that the trend is becoming weaker. As a result, the currency pair might settle for some consolidation, or even reverse its direction and start moving upwards again.

Clearly a correct trend determination is essential for successful trading, however, it might be helpful to mention, that the actual amount of payouts also depends on an individual’s trading skills and experience.

Because of this, it’s very hard to determine the realistic returns of FX traders because, during the data compilation, it’s almost impossible to consider the skill level of a random trader and say that on average that much is being made. The amount of re-calculation that is required to actually come up with a fair and average number is just not within the grasp of the industry simply because they don’t have the means of research.

Another important factor to point out is that high volumes can be a sign of strong moves, but it does not guarantee that the trend will sustain itself for a long time. For example,

Forex trading volumes started booming from the middle of March. Actually, this is the period of very sharp moves in the Forex market.

For example, the most traded currency pair in Forex, EUR/USD, which at one point reached 1.1494 level, has fallen to 1.0635 marks, and this happened in less than 2 weeks of trading sessions. Clearly this move was decisive and as a result, some commentators started openly discussing a possibility of upcoming Euro/Dollar parity in the close future. The last time this happened was back in 2002. So this must have been a notable event in the Foreign Exchange market according to CNBC.

At the beginning of the previous month, the daily volume for this currency pair was at 56,000. However, as the month progressed, this indicator increased dramatically and by March 20th, it exceeded 334,000. This represents approximately a 6 fold increase in volume, compared to levels at the beginning of February.

This data points at the fact that most likely there was a lot of convention and effort behind the dollar’s sharp rise and therefore predictions of the Euro/Dollar parity seemed quite reasonable. However, the market chose a reversal, the single currency did regain some of its losses and nowadays trade near 1.0830 marks.

So if a trader only strictly followed the volume, ignoring other indicators, then he or she might have concluded that EUR/USD was in strong downtrend and opened short EUR/USD positions and most likely suffered significant losses.

As we can see, in many cases observing the latest trading volumes can be helpful in determining the trend strength and also for detecting potential reversal points. However, just like any other Forex indicator, if it is used in isolation, with disregard to other technical and fundamental measures, the volume can be very misleading and can easily lead a trader to wrong conclusions.

There were several other factors in play, which prevented the Dollar from reaching parity with the Euro. For example, until March 2020, the USD was a much higher-yielding currency than its European counterpart. After reaching the high watermark of 2.50% Federal Funds rate was reduced several times, but even by February 2020, USD was still yielding up to 1.75%, so it was quite attractive for carrying traders.

However, as the US Federal Reserve cut the rates to near-zero levels once more, this advantage has vanished. Also during the same time, the US consumer confidence fell significantly, hinting at the possibility of an upcoming recession.

So in conclusion, we can see that analyzing volumes can be very helpful sometimes, however, to guard against potential mistakes and losses, it might be a better idea to use it in conjunction with other technical and fundamental indicators.