Although almost all week macroeconomic calendar was filled with important publications, undeniably event of the week and what had the greatest influence on the foreign majors was the Wednesday meeting of the Federal Reserve, which as expected has decided to raise interest rates from 0.50% to 0.75%. It was first increase this year and only the second in last ten years, however, as we learned from the FOMC statement and press conference only in 2017, the Fed expects three consecutive increases. Probably next increase is expected in the middle of the year, however, it seems too early to speculate about this.

What influenced the course of American dollar were also published on Tuesday, price indices of export and import, which in terms of month-on-month in November were – 0.1% compared to forecasts of -0.2% and -0.3% against forecasts – 0.4%.

On Wednesday, we also met quite a large packet of data from the US, which included readings of retail sales, PPI and industrial production and business inventories.

On Friday, we learned also November report from the United States regarding building permits and started construction of residential real estate. The results were worse than in October and analysts’ forecasts:

Looking at the charts of major currency pairs we see that from the beginning of the week market was positioning before Wednesday’s publications as a result of what we saw slight weakening of US dollar.

Let’s get to the charts…

It was fourth week for which market moved in a ascending wedge formation. As a result of Wednesday’s interest rate hikes in the US we observed dynamic decreases as a result of which the market broke bottom of the formation. In the following days we witnessed the strengthening of the US dollar so on Friday evening market also defeated the important support level around 0.7315.

Looking at the weekly chart we see that, in accordance with the previous breaking of upward trend line attitude of the market changed and in the near future we can expect declines to continue even in the vicinity of the level 0.7170.

This what had initial impact on exchange rate of Australian dollar were published in Thursday night data from Australian labor market. They were extremely positive because despite forecasts that pointed to (the already solid) increase by another 20,000, the reality turned out to be much more positive. Not only was revised last reading (15.2 thousand) but in November was added 39.1 thousand new jobs. The positive tone of these publications were spoiled by slight increase in the unemployment rate from 5.6% to 5.7% and even though was noticeable strengthening of the AUD. Soon, however, the data remained in the shadow of earlier increases in US interest rates and the market continued to decline.

Following the rejection of support at 1.0525 from beginning of the week we saw very calm increases, which admittedly did not reach area of resistance at 1.0685 and while before publication of Federal Reserve to raise interest rates rejected the level of 38.2% Fibonacci correction.

As a result of ongoing market declines since Wednesday price defeated also extremely important from the point of view on weekly chart support level 1.0490.

From Thursday evening we observe calm increases, which could reach up to around the levels of 1.0490 or 1.0525 are further successively around 38.2% and 50% Fibonacci of the last downward impulse. Re-test and the rejection of one of these levels could be a signal for the continuation of declines.

Looking at the monthly chart we see that the market breaks currently bottom of lasting almost two years consolidation, thus opening the way for further declines. It seems more probable, therefore, assumed by many analysts to achieve parity between the Euro and the US Dollar.

Like the above two instruments, also here since the beginning of the week we saw moderate increases supported, among others by Tuesday’s publication of the CPI, which year-on-year (y / y) despite still better forecasts of 1.1% compared to the previous reading of 0.9% in November amounted to 1.2%.

For the strengthening of the British pound also corresponded Wednesday’s labor market data:

As a result of increases in US interest rates we observed very dynamic drops, making the market break the bottom of lasting for more than two months growth channel.

Since Friday’s bullish reaction in the area of local support we see a correction which soon could test level 1.2525 coinciding with the 38.2% Fibo correction. The rejection of that level could trigger further declines even around 1.2325 or 1.2150.

One of the most important events on the other hand, was GBP BoE unanimous decision to leave interest rates unchanged at 0.25%.

As a result of the ongoing declines on Wednesday evening market not only defeated three-weeks uptrend line but also on Friday defeated a very important resistance level around 0.6980.

Looking at the daily chart we notice that on Thursday market has not only rejected the important resistance zone but also re-tested it from the bottom (as resistance). If demand does not negate the Fridays breaking of 0.6980 level and declines will continue, then we would expect to test even the area of level 0.6675.

As a result of lasting almost five weeks declines market came to and on Thursday rejected the line, lasting from May upward trend. On Thursday we arrived in the vicinity of the lower limit of the previous channel growth coinciding with the measuring 61.8% Fibonacci correction of the earlier declines where we saw bullish response.

From technical point of view, in near future we expect a re-test of support around 1,3282 coinciding with the 38.2% Fibonacci correction, which rejection or defeat could determine the future direction of the movement.

What affected the Canadian dollar was the standard midweek reading of American inventories of crude for the past week.

Significant also proved to be Thursday’s data on retail sales, which, despite optimistic forecasts of 0.4% compared to the previous reading of 0.3% in October, the month to month was only -0.8%.

On Friday we met also purchase of foreign securities, which, despite still better forecasts of 12,35B to the previous reading of 11.79% in October were up 15,75B.

What awaits us in the coming week?

After a very exciting week in which we met 3 decisions of central banks and had very high volatility of the US dollar, trading sessions after the weekend look to be decidedly calmer. Economic calendar for next days is much poorer than it was last week. Moreover, on Friday (23 December) Japan celebrates Emperor’s Birthday (markets do not work) and the London Stock Exchange because of the Saturday Christmas Eve works only until 12:30.

Below the most important macroeconomic publications, which should be paid attention to in the coming week. 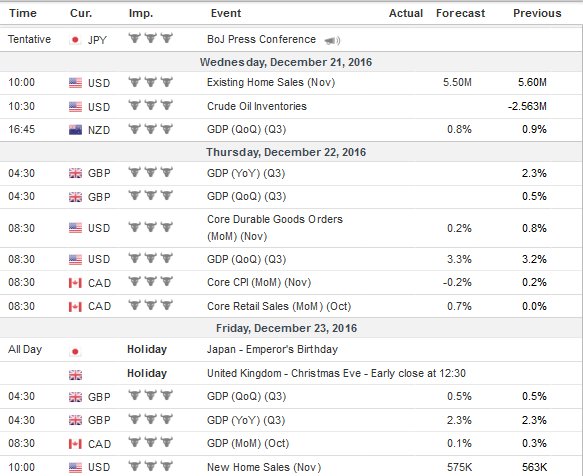