Home Analysis Inflation down under

Here come the inflation numbers – New Zealand tomorrow, then Australia next Wednesday. These are especially big events in the Antipodes, given both countries produce only quarterly inflation statistics. And the data will influence respective central bank communication in early February.

Even taking falling food prices into account, our economists see NZ inflation rising 0.4%qoq, and 1.9%yoy. That’s 0.1%pt above the RBNZ’s forecast, and close to the mid-point of 1-3% target range. The forecasts for Australia are similar for the yoy rates – 0.4%/1.9% for core, 0.8%/2.1% for headline (broadly in-line with the RBA view). But of course the RBA’s target range is higher, so this implies inflation still 0.5%pt below the mid-point of the target range.

At face value the implication is clear – this should get the RBNZ hiking before the RBA (which is what DB forecasts). Yet market pricing is different – it has the central banks both hiking once in Q4 this year. We offer some additional observations, which make us think that the NZ inflation story has additional upside relative to Australia. 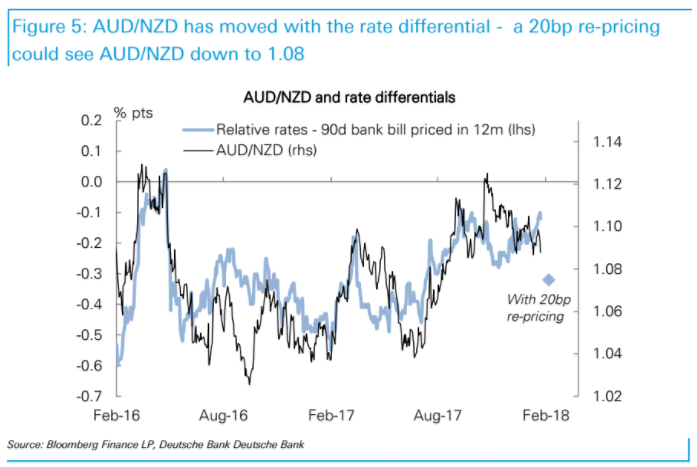 Try selling AUDNZD on one of the STO’s accounts>>>

Bottom line: we expect inflation outcomes to prompt the market to differentiate between RBNZ and RBA timelines. Figure 5 suggests a 20bp re- pricing could get AUD/NZD down to 1.08. We like selling AUD/NZD.