„Searching, Analysing, Trading” is a series of analyses designed for an investment strategy based on Price Action and Elliott Waves. Its step-by-step description can be found in this link. We kindly invite you to follow our today’s review of selected currency pairs and potential opportunities for transactions.

Our analyses are prepared based on Ducascopy’s SWFX Sentiment Index, available here. 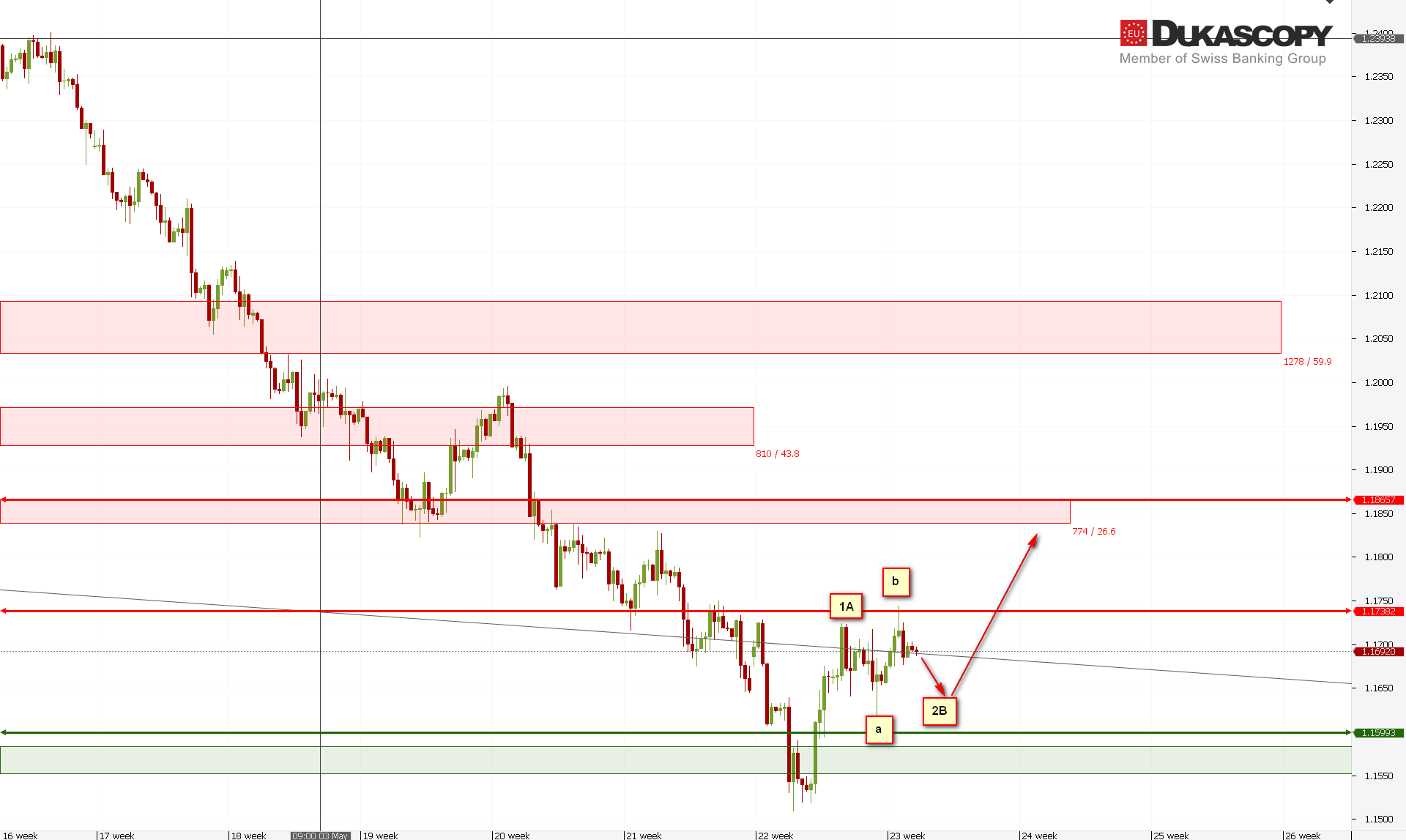 Nothing interesting is going on within higher TFs, so why don’t we go a bit lower? The move up that took place on the EUR/USD pair as a result of defending a support may be laid out as a five. Yesterday’s gains are a three, therefore it can be considered as wave b in an irregular correction. If this assumption holds true, we can expect a correction down as part of wave c, which may lead to a retest of the upper limit of the support zone. Once it has been completed, wave 3C will appear, which should cover at least the minimum distance drawn for the small H&S that is currently developing and reach the nearest resistance level around the 1.1830 level (our scenario assumes that the five we mentioned is not wave c as part of an irregular correction).

On the Ichimoku chart, we can see that the pair managed to breach the Tenkan line from the daily chart and to reach the areas of the Senkou Span B, which rejected the price. If Tenkan is retested, i.e. wave 2B forms, with the current neutral sentiment, we will look for entries to trade wave 3C, which should test the Kijun line from the daily chart. 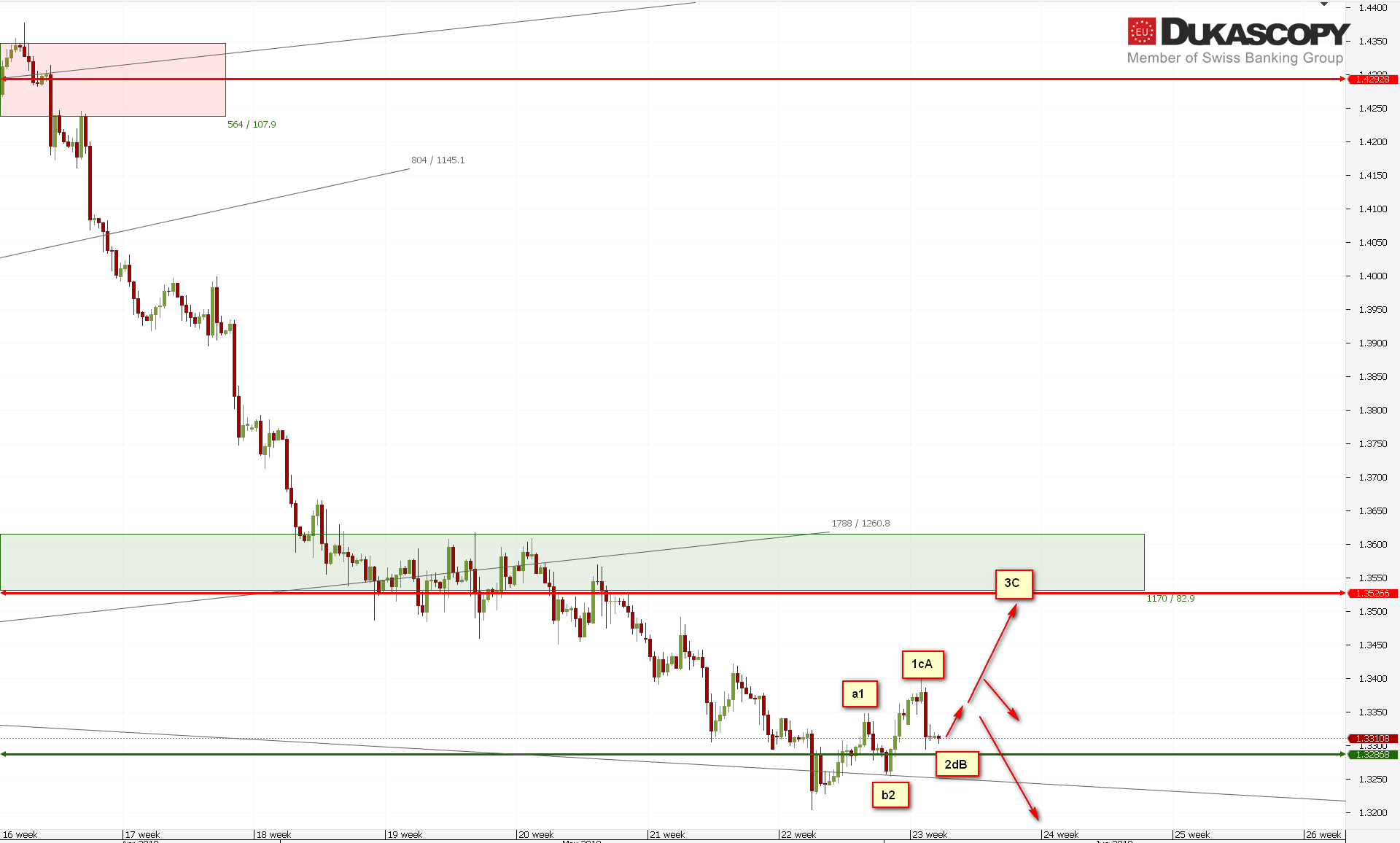 There are more variants to choose from when it comes to the GBP/USD pair. As I mentioned yesterday, it is hard to tell whether what we have been observing for the last two days is only a correction of wave 5 or a beginning of a larger reaction to the whole impulse down. If this is merely a correction, it may take the form of a simple abc zig-zag and it should end any time soon. It may also be a complex correction – then the decline that is playing out now is its wave B and once it is complete, we will see wave C up. The third variant is that a triangle forms and the missing element for it to complete is wave e. The last scenario is the most bullish one, which implies that a 1212 sequence occurs – translating into a stronger move up even towards the recently breached support zone around the 1,3500 level.

On the Ichimoku chart, we can observe that the pair has breached the Tenkan line from the daily chart and, as was the case with the EUR/USD pair, it reached the Senkou Span B line, which rejected the price. At present we are witnessing a retest of the Tenkan D1 and Kijun H4 lines. Sentiment is favouring long positions. Since yesterday we have seen an increase in longs at the expense of shorts. This allows us to look for positions to trade wave e of a triangle, or, more optimistically, to trade wave 3C, which should reach the area of the Kijun D1 line. So far there has been no signal, so we are sitting on our hands. A clear decline below Tenkan and the cloud will negate the upward-moving scenario. 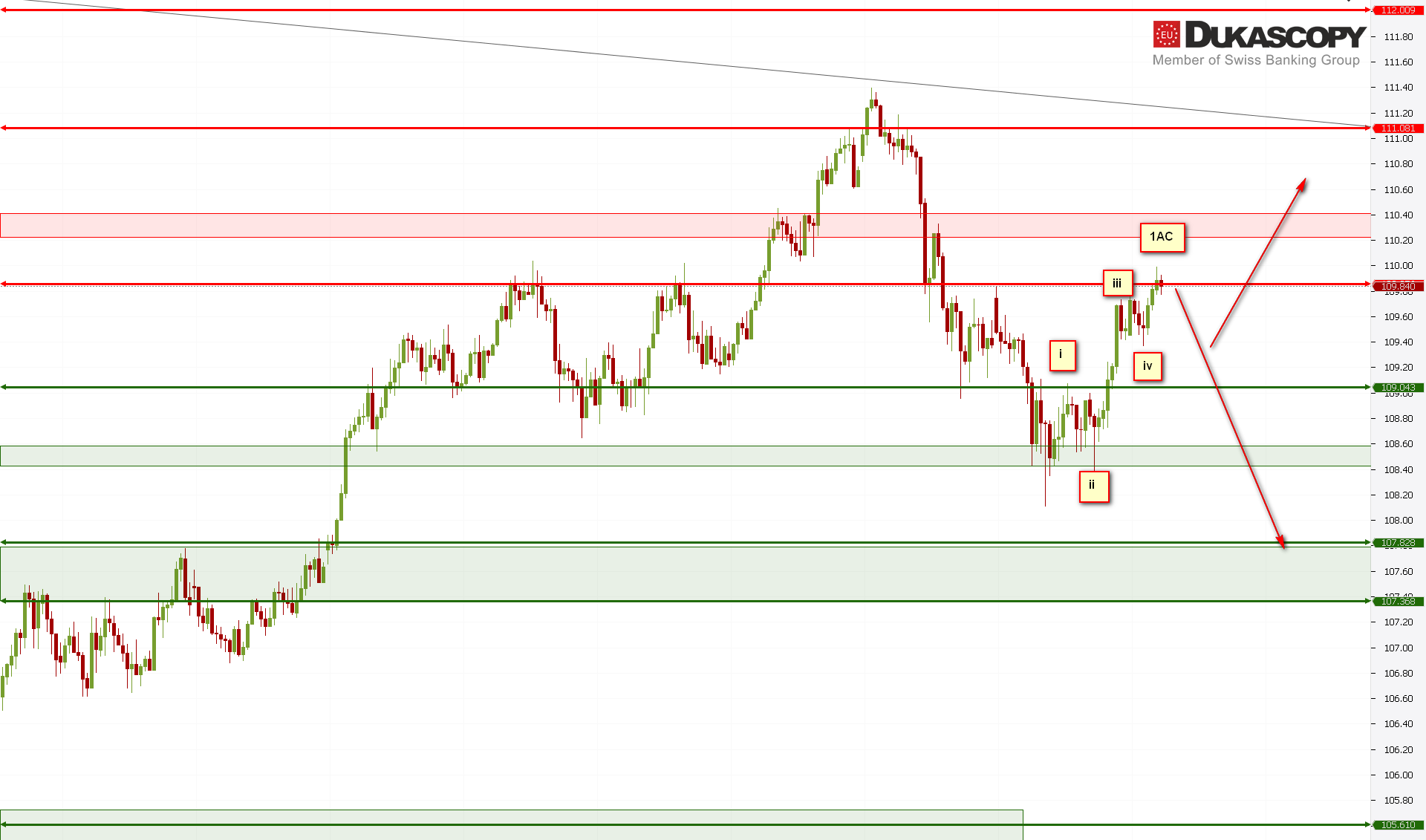 On the USD/JPY pair, an upward-moving wave 5 formed that reached a local resistance level. If the pair rejects that level, a correction as part of wave 2B should take place, and once completed, another wave 3C up should follow. As the declines from the top are two fives, I exclude the scenario with wave c as part of an irregular correction (although I have seen many an unusual thing in my trading career) and then I am anticipating continuation of the moves up, which is my base scenario.

Looking at the Ichimoku chart, we can see that the pair is struggling with the Kijun D1 line and the price even managed to exceed it slightly. With the assumption that moves up follow, a correction of any sorts should reach the Tenkan D1 line area and reject it. Then we may look for an entry to trade 3C. 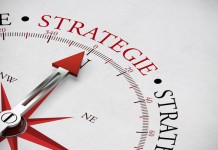