“May you live in interesting times” – this is (supposedly) an old Chinese saying and it is by no means a wish for good times, but on the contrary, it is rather a curse… We experience this curse here and now… because these interesting times have come and whether someone wants it or not… everything started in China…

The threat of coronavirus disease has paralysed the world economy. The disrupted supply chains caused by the production stoppage at many Chinese industrial plants were just the beginning of the trouble. The spreading virus has already reached all continents. Current events resemble a scenario of a catastrophic movie or RPG… but in this case, the script writes life… and you have no “three lives” as in the game…

In Europe, Italy is the hardest hit, where the number of cases has already exceeded 18,000, Spain 4,200 and France 3,600. The virus does not spare the Germans either, where the number of patients detected is over 3,000.
In response to the spread of the virus, countries around the world are taking measures to slow it down. Governments have suspended flights to countries infected with the virus, closed cities, borders are strictly controlled, people returning to the country are quarantined. Governments have called on people to stay at home and suspended important sports and social events.
In the absence of drugs with a proven effect on this disease, the only effective way to avoid an epidemic is prevention…i.e. to prevent infection with this dangerous pathogen.

Prevention is mainly about avoiding contact with potential carriers of the virus. As a result, schools, theatres, cinemas, stadiums, restaurants are closed, some shops and shopping malls are also closed. Tourist centres are closed, hotels are empty and airlines, if they operate, mainly carry “air”. President Trump has suspended all travel to and from Europe for his citizens. Any gathering of more than 50 people is treated as a major health risk. It is advisable to stay at home and leave it only when necessary. We can imagine what impact this has on the economic activity of the affected countries, i.e. basically the whole world. The effects can be seen on stock exchange indices.

A bloodbath on the stock exchanges, which has not been seen for years, has stopped quotations on the NYSE twice, forced by drops above the allowed limit. Trading on the three main Wall Street indices was stopped a moment after the opening of quotations on Thursday. This was due to the strong fall of the S&P 500 index, which started trading with a 7 percent drop. In this situation the quotes are automatically switched off for 15 minutes. And that was the second time this week… and I suspect that was not the last time.

In such uncertain times, it is difficult to analyze the market only on the basis of charts, when new news is coming in every move that can change market moods by 180 degrees. So-called “safe heavens” are not safe havens for capital any more… when the market has a crisis, the “sell all” and run away in cash mood, is on the top. Because what is the use of stock shares, cryptocurrencies or even being a gold owner, when we pay in cash for necessities in the store… Cash in troubled world is the king.

Therefore, bearing in mind what is affecting the world economy, I was convinced of my Tuesday’s gold analysis: “Gold (GOLD) – Divergence suggests correction” and I believed in further declines on this precious metal.

I wrote in the analysis from 10 March: “Looking at the chart purely from a technical point of view, we can see that on Monday the price knocked out of the bearish engulfing formation created by the weekly candles, but the day closed inside this formation creating a false breakout (blue marking). Moreover, when we look at the H4 chart, we see a downward divergence between the MACD and the gold price chart. Currently, the price is on the local trend line which, if overcome, can lead to a downward correction on this instrument.”

One look at the charts from March 10th and 14th and you can see how the market treated Gold. The price has fallen well beyond the predicted level. What’s more, the weekly candle creates another downward trend suggesting that this is not yet the end of the discount in this market. 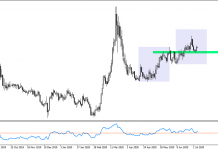