This morning’s announcement from PM May of a snap general election on the 8th June is in our view a game-changer for both the UK’s Brexit negotiations and sterling. We argued last year that an early general election was the only way to resolve the political impasse the U.K. government faces in conducting Brexit negotiations. The 2020 General Election imposed a hard deadline on delivering Brexit on an unrealistic timeline as well as making the Prime Minister reliant on a small Euro-sceptic majority. Both of these factors would have required political and market pressure to impose the appropriate political shifts that would have allowed a realistic deal to emerge.

In contrast, today’s general election announcement changes the outlook. We do not see the election as a mandate for hard Brexit. Instead, assuming current polling proves correct, it should result in a larger Conservative majority. This will have three material implications, in our opinion. First, it makes the deadline to deliver a “clean” Brexit without a lengthy transitional arrangement by 2019 far less pressing given that no general election will be due the year after.

Second, it will dilute the influence of MPs pushing for hard Brexit, strengthening the government’s domestic political position and allowing earlier compromise over key EU demands for a transitional arrangement.

Try out free trial of FxWatcher service and check out the rest of today’s big banks commentaries!

Third, it strengthens the PM’s overall negotiating stance who in recent weeks has clearly fallen in line with the European negotiating approach. This will involve a settlement of the Brexit payments and other divorce aspects first, to be followed by a lengthy transitional period during which the final outcome of Brexit will emerge. This sequenced approach materially reduces the “crash risk” of Brexit negotiations as well as strengthening the Prime Minister’s hand in pursuing an orderly (and very lengthy) withdrawal. All of the above in turn reduce downside risks for the U.K. growth outlook over Brexit negotiations.

We have been structurally bearish on sterling for the last two years but are now changing view. We are closing out all our bearish FX trades. We intend to review our sterling forecasts in coming days. 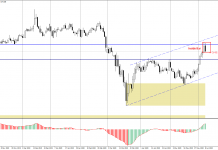