Home Education How to Pick a Trading Session?

Trading the financial markets is not just about trading systems and picking up the right entries. It is also about timing your entries. In today’s blog, I will focus on teaching you how to trade using the correct market hours. Regarding that matter, there are specific periods of activity for different pairs and equities. Asian, US, European sessions all move various financial markets, and all of them have both advantages and disadvantages. Each of the different periods is characterised by volatility for different currencies and markets.

In the Interbank Forex market, the majority of large international banks have multiple offices around the globe, so that they can pass their local clients’ foreign exchange orders to an affiliated branch at any time during the 24-hour cycle.

This process would typically be executed in an orderly fashion at any hour of the working week of market hours unless interrupted by a bank holiday. Banks would operate regular business hours at each regional office, and the open trading book is passed onto another regional office usually in a later time zone. 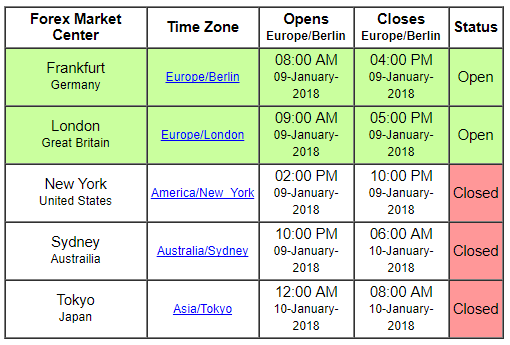 Although there is no official start and end of trading hours, these hours normally reflect the customary open times during which traders might be able to execute foreign exchange transactions in different currency pairs. So for retail traders, trading usually begins early Monday – late Friday. On Admiral Markets platform, it is (depending on daylight savings) usually 00:00 Monday – 23:00 Friday (Forex ECN accounts).

As traders working in banks slowly begin to close on Friday, this is also when the Forex market effectively closes for the week for retail traders.

Major and Minor Forex Trading Centres and Their Trading Hours

In each of the major trading centres, we will see most banks operating during regular business hours each weekday, excluding weekends and bank holidays, These hours overlap with the regular business hours of another major trading centre in a different timezone. Because of that overlap, we traders have an uninterrupted flow of trading – a smooth and continuous transition of Forex trading throughout the globe.

In the online electronic Forex market and Over-the-Counter (OTC), the three major trading sessions for currencies correspond to the normal banking business hours in the cities of London, New York, and Tokyo.

In their respective countries of Great Britain, the United States, and Japan, each of these cities acts as a major money hub.

All of these major money centres have a large number of banks situated in them that actively make markets in a wide range of Forex currency pairs. The banks also trade among each other in the OTC Interbank market via telephone, brokers as well as using electronic dealing systems in addition to dealing with their clients.

Banks situated in a particular Forex trading centre will typically have higher trading volumes in currency pairs that involve the local currency.

If the currency pair is a cross made of currencies that are most actively traded during Asian and European hours (e.g., the GBP/JPY, EUR/JPY, etc.), there could be a more significant response to the Asian/European session overlaps. That could impose a less dramatic increase in price action during the European/US sessions concurrence. The presence of scheduled event risk for each currency might have a substantial influence on activity, no matter the pair or its respective session. 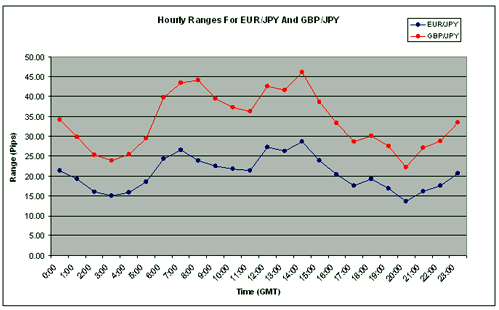 The London Session: This is a very active trading session. I prefer to trade all European crosses including the GBP/JPY – my favourite pair – and GBP/NZD – the most volatile Forex pair. In the equities sector, the DAX 30 is an excellent instrument to trade during the London session as it is tied to German businesses.

The New York Session: This active Forex trading session starts at 08:00 New York Time and closes at 17:00 New York Time. It directly overlaps with the London session, but it does not overlap directly with Tokyo, so institutional bank traders in New York will typically pass books on to either West Coast counterparts or to those situated in New Zealand cities like Auckland or Wellington, or to Sydney, Australia. The best pairs to trade the US session are the USD and CAD crosses. Due to the correlation of the JPY pairs and the US stock market, the USD/JPY and GBP/JPY are great pairs to trade, too. Regarding commodities – Gold and WTI are also great options.

The Tokyo Session: The major Tokyo session typically starts a bit late for European traders. The most active movement is seen in Tokyo session between 2 – 4 AM. Upon its close around 7 AM GMT (adjusted for daylight savings), its books are passed to counterparts situated in London or continental European cities like Frankfurt or Paris.

During the Tokyo and London overlap time, the Forex market is again quite active and liquid. Major currency pairs and those involving the Yen, AUD and NZD seem most active and liquid during this trading session.

Minor sessions offer transitional liquidity to the Forex market as the opening of a major centre is awaited, and we might see a lot of counter-trend moves. Traders might witness additional liquidity in less actively traded currencies. A good example is the Frankfurt session, usually referred to as “Frankie Fake” due to so false breakouts and occasional counter-trend moves. When I started posting on Forex Factory, I was well-known for providing Frankie Fake setups.

Major overlaps among Forex sessions are crucial to traders because those times typically correspond to periods of higher volatility, trading volume, and order activity. In my opinion,

the most important and active of these overlaps occurs between the London and New York session. During this time, traders should witness spikes in volatility, with a greater activity focussed on the USD, CAD, EUR, and currencies quoted versus the US dollar. This one is my favourite sessions.

During low liquidity, usually when a market opens, and around 12 AM, there is a considerable risk when trading. Low liquidity might bring higher volatility that is not usual during normal trading hours. I don’t recommend opening positions anywhere between 12-2 AM. Most of these high-risk times can put a trader’s account at risk.

Low liquidity – This is related to the Forex market’s depth, and it impacts the ability to handle large transactions effectively;

The Best Time to Trade the Market

The first three hours of each major session are usually the best in terms of momentum, trend, and retracement. It is then when we traders find the best trading possibilities. Additionally, the TOTH (Top Of The Hour), the first and the last five minutes of each hour will usually provide volatility and spiky market movements. It happens as intraday traders take their profits and new fresh buyers or sellers join the fray.

Still find it hard to know which session you are in? Don’t worry, just download MetaTrader Supreme Edition add-on and use Session Map Expert Adviser. It will show you the running session. 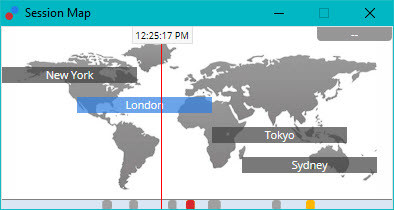 I hope that you enjoyed the article and look forward to receiving your feedback or questions!