Home News How to safely trade the news?

Every trader develps their own style and risk tolerance. Some are more risky and jump into news announcements right away. In this example, let’s explore a simple way to understand the fundamentals and then look for a conservative low-risk entry.

First, we have to understand what the ECB meeting was all about. The ECB has been printing money for months to stimulate their economy through a complicated process called quanititative easing. Whenever they print money their currency(Euro) weakens. It was speculated that today the ECB would make the decision to extend their bond purchasing program past spring 2017. They currently buy bonds at a rate of 80Billion per month.

The market was entering this announcement speculating that Mario Draghi would extend bond purchases at the current level of 80B per month. Instead, the ECB cut their bond purchasing to 60B per month which saw a quick spike up in the EUR/USD. The market initially jumped higher by over 70 pips. However, as soon as the statement was further digested the market discovered that quantitative easing was be extended to at least December 2017 and that the nature of the extention was open ended and could easily be increased if necessary. In the end, more quantitative easing equals a weaker Euro. Further comments in the next 60 min re-enforced this position causing the EUR/USD to fall over 250 pips.

Now at this point someone will wonder: This is why trading the news doesn’t work. It’s really hard. Even the market gets it wrong sometimes. The market spiked up and then ripped down within a few minutes and you expect me to understand what’s happening? It is all just too complicated and risky to get invovoled.

On first glance, trading this event seems intimidating. Here are a few simple thoughts that will enable you to take advantage of the movement in the market.

Consider this chart of the EUR/USD below: As the Euro falls though points of support as illustrated by the blue boxes, that support becomes resistance. We are looking to enter Short in the direction of the sentiment as the market pulls back to resistance. We want to capitalize on those pull backs as the market retraces. Technical tools best work when the market is driven by recent sentiment. 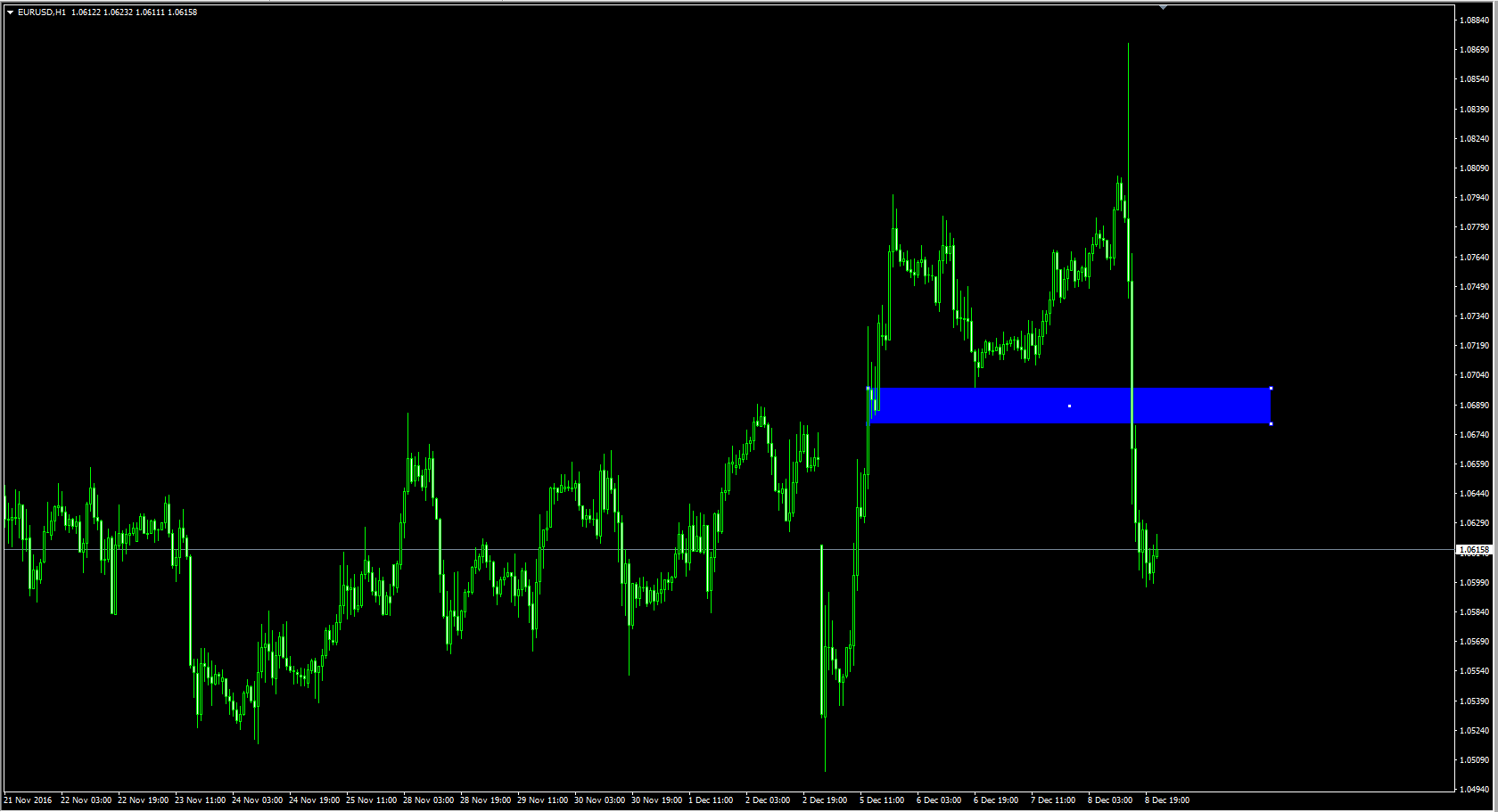 Above, the blue bloxe represents an area on the 1 Hour chart that we could have looked to sell from as the market pulls back. We know sellers are eager to get invovled because of the news that just happened.

Below, is the 5 min chart with the same blue boxes of resistance. 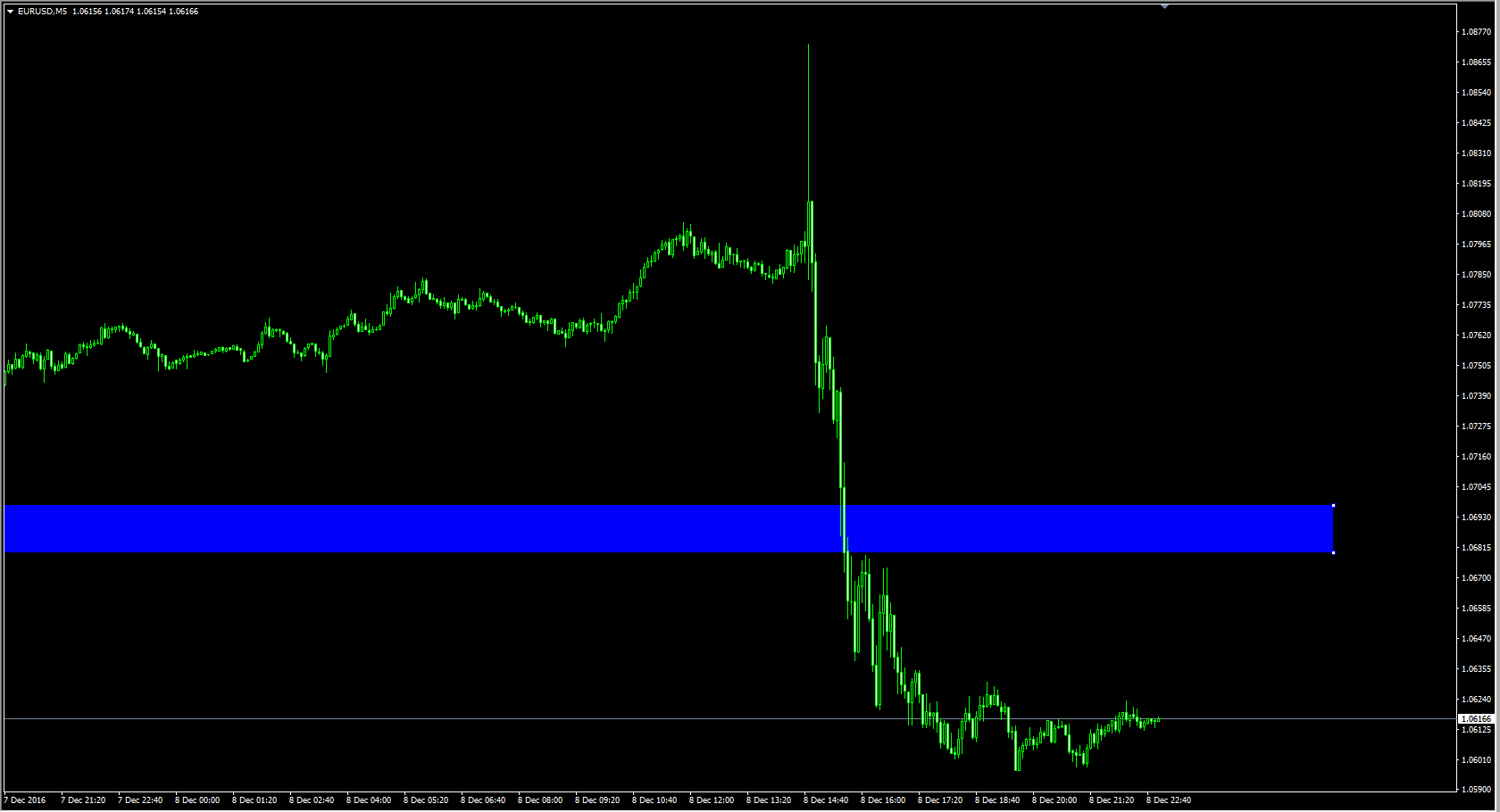 What happened? The market retraced to resistance and was quickly sold off because sellers who had not gotten into the move initially were patient and waited for a low-risk pullback to enter. You could shorted the EUR/USD and used a more conservative stop here and been very confident. This is news trading. Professional traders simply wanted to short the EUR/USD because of what happened at the ECB rate decision. They did it in a way that was safe and managed their risk. They were confident in their short position because they understood that more quantititive easing equals a weaker Euro.

If you would like to learn more check out my Free Forex Course.

For trade recommendations and analysis join my Facebook Group!