Home Brokers Capital.com Brexit and the Pound – is all the bad news already in...

There’s seldom been a dull moment for the British pound over the last 18 months. The pound/US dollar (GBP/USD) exchange rate started 2017 around the 1.21 mark and ended the year at 1.35.  An 11% rise in one year is an impressive one in the foreign exchange markets – but since mid-April of this year, GBP/USD has dropped from 1.44 to almost 1.30 at the end of June, a near 10% slide.

There have been a couple of factors here – disappointment regarding the lack of a UK interest rate rise so far has been one, and the ongoing apparent lack of progress in Brexit discussions is never far from traders’ minds.  But has this run of pessimism been overdone? It looks like the second half of 2018 could be much better for sterling’s fortunes.

There’s a saying in markets that “all of the news is in the price” – and it could be argued that we are at (or at least getting near) to that point now.  It does feel as if the last two months have seen an ongoing slew of negative news for the pound – and this has pushed it lower against various other currencies.  But when sentiment hits an extreme, as it arguably has at the moment, that’s when we have to start thinking that all bets have been placed and further negative news is not going to push the market lower.

Admittedly it is only a couple of days since the slide for GBP/USD has stopped in that 1.30 area, so any optimism now may be a little on the early side. But the news at the end of June showed that the UK economy grew at a faster rate than was broadly expected in the first quarter of 2018.   This has clearly caused some of the more pessimistic to revise their views for the British currency. It may be some time before we see the 2018 GBP/USD highs of 1.44 reached again, but don’t be surprised if the 1.30 level marks something of a line in the sand.  These stronger economic numbers also increase the chances of a rate rise from the Bank of England in August, which would traditionally be expected to give a boost to the currency.  The last week of June could finally have marked an end to what has felt like a never-ending flow of negative news for the pound.

Capital.com is a Fintech start-up that harnesses the latest advancements in machine

learning and AI to provide the ultimate trading experience. With an investment of 25 million US dollars, and growing base of customers, Capital.com currently has 17,000 daily active users. Capital.com has offices in Limassol, Cyprus, London, UK, Gibraltor and Minsk, Belarus.

The company develops software solutions in the trading environment, including the Capital.com app of the same name and the supplementary Investmate trading education app.

The company is licensed by CySEC, license 319/17. Trading is risky and you may lose all ofyour invested capital. Further information can be found at https://capital.com/ 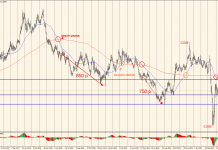