We made it around the sun again. I for one am very proud of the human race for not destroying our planet. Even though the Doomsday Clock has been showing Two and a Half Minutes to Midnight since January, somehow we’ve managed to survive. I for one will be spending the weekend on YouTube watch People Are Awesome videos, and partying of course. 😉 Happy New Year!!

The currency markets have seen more action in the last few hours then they have all year. It looks like the US Dollar is showing some serious signs of deterioration. We mentioned the Dollar weakness in yesterday’s update but the rate of decay has seriously accelerated this morning. The British Pound seems to be the biggest gainer but critical technical levels are being broken across the board. 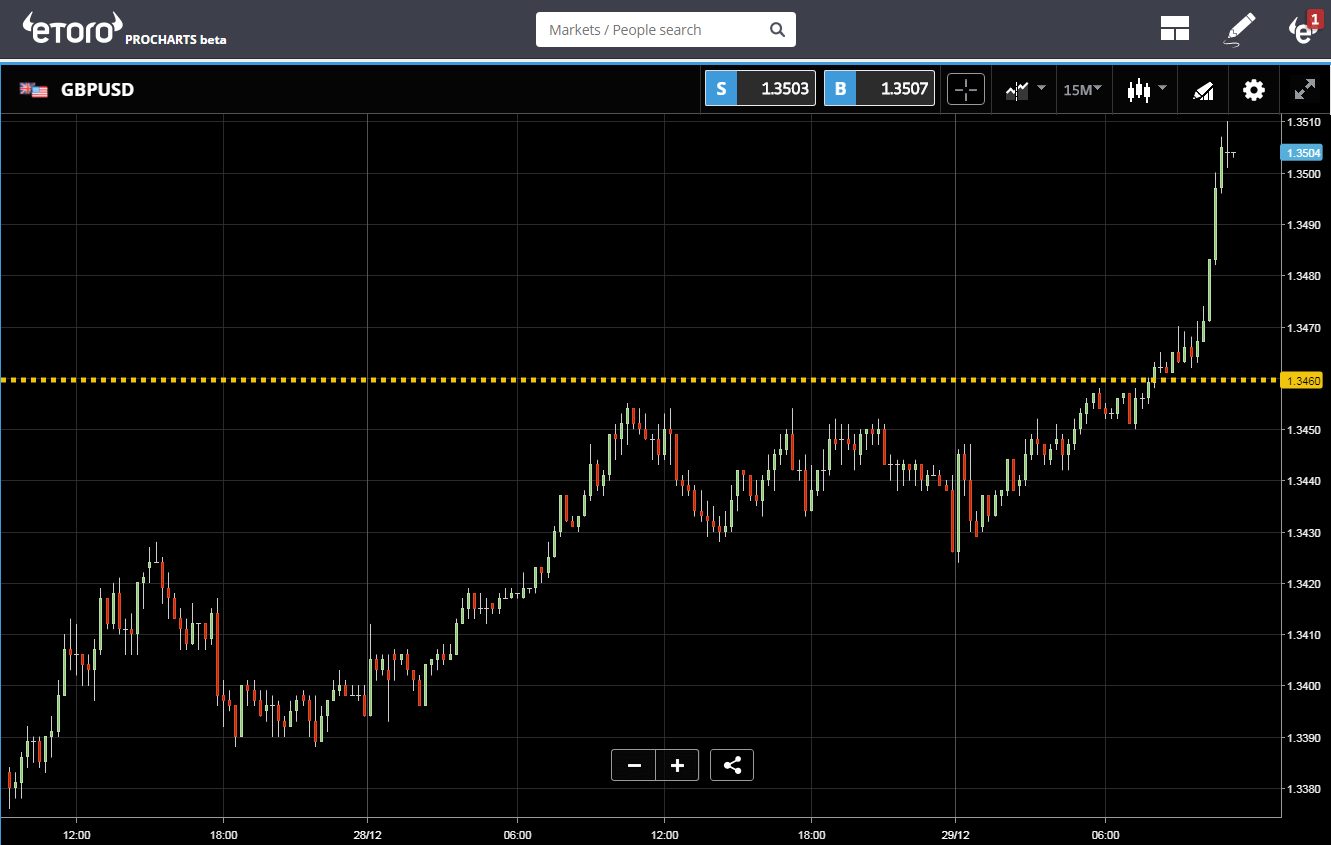 Unfortunately, I can’t really explain this move as it’s Christmas week and most of the UK is on Holiday. Yet, all brokers are online so there should be plenty of liquidity in the market.

One of my favorite opportunities on Dollar weakness at the moment is against the Japanese Yen. Here’s a chart showing the range of the USDJPY for most of the year from 108 to 114.50. 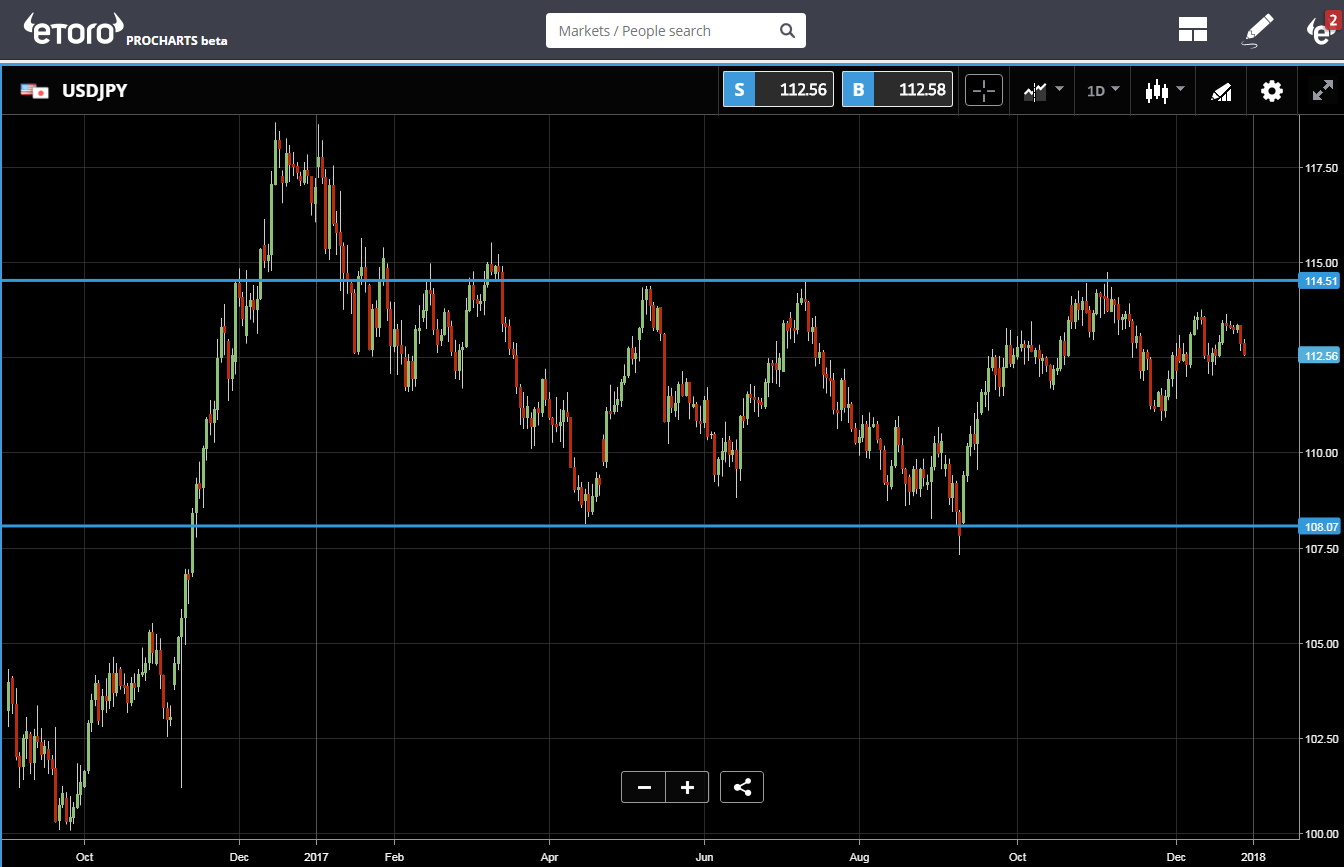 It would be difficult to imagine the Bank of Japan getting more aggressive to try and weaken the Yen, so if the Dollar continues to drop we could find ourselves near the bottom blue line pretty quickly.

The technicals of bitcoin look fine. From the pre-Christmas pullback to today, the chart is forming a classic wedge pattern on the chart. In this case, the line on the bottom (support) is a bit stronger than the line on the top (resistance). However, a breakout is possible in either direction. 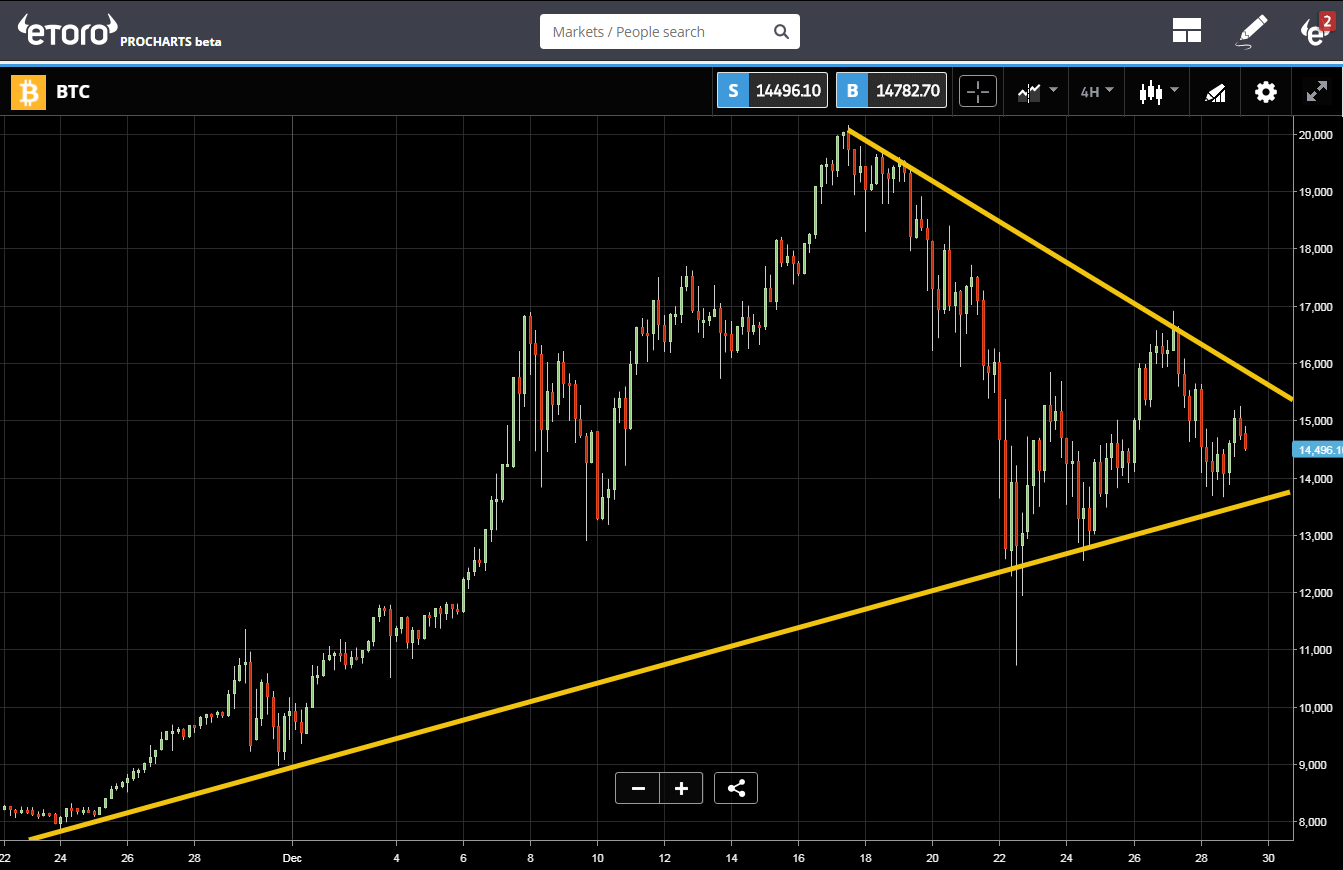 What concerns me is the state of the network. The number of transactions per second has come down significantly in the last week… 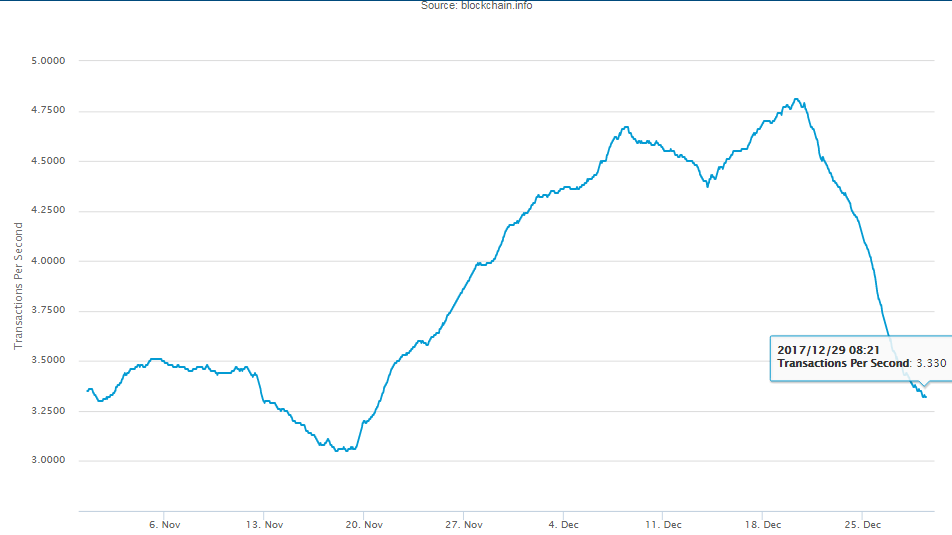 However, the average time to confirm a transaction has increased dramatically… 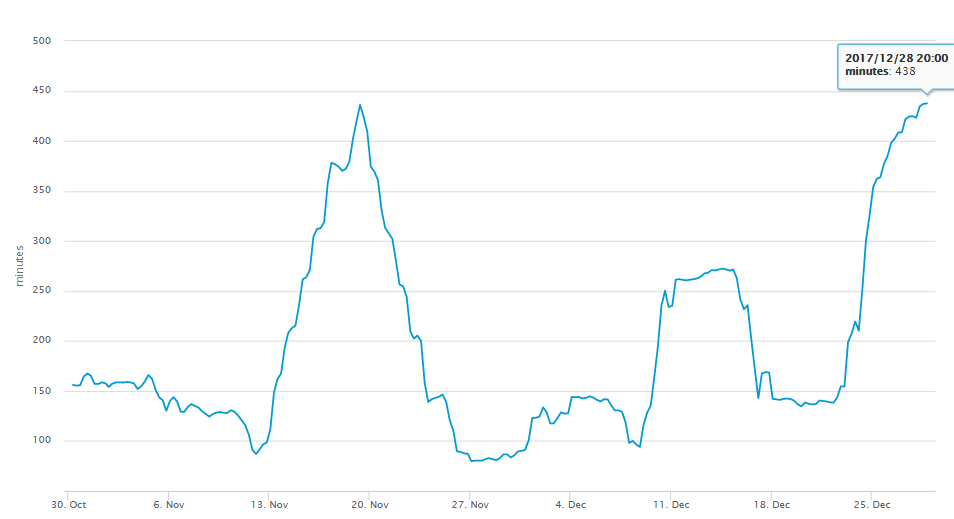 This as the mining power (hashrate) of the network has only declined slightly this week. 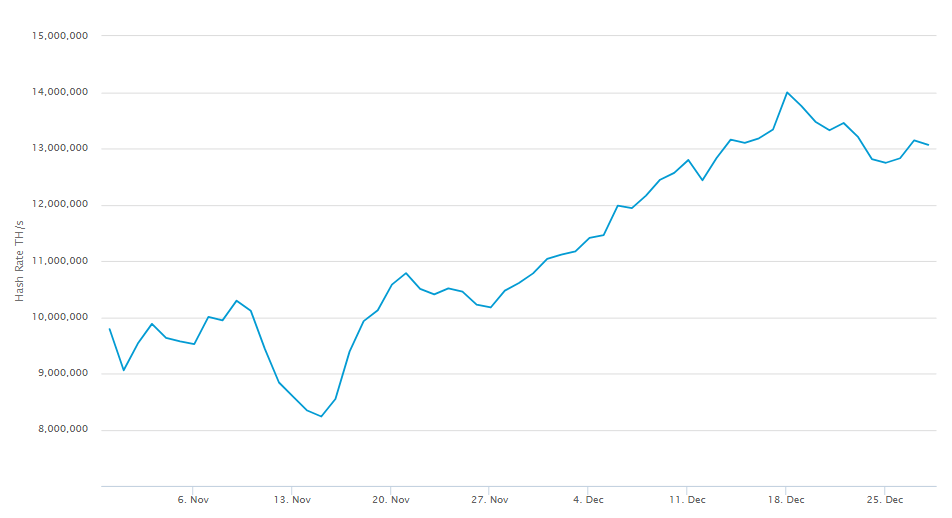 Even if we do see another exponential boom in the price of bitcoin and even more YOLO FOMO buyers coming online I don’t think the network would be able to handle much more than it’s already doing. The network is flooded.

The number of unconfirmed transactions in the blockchain’s queue (mempool) has been at a critical level for most of this month. 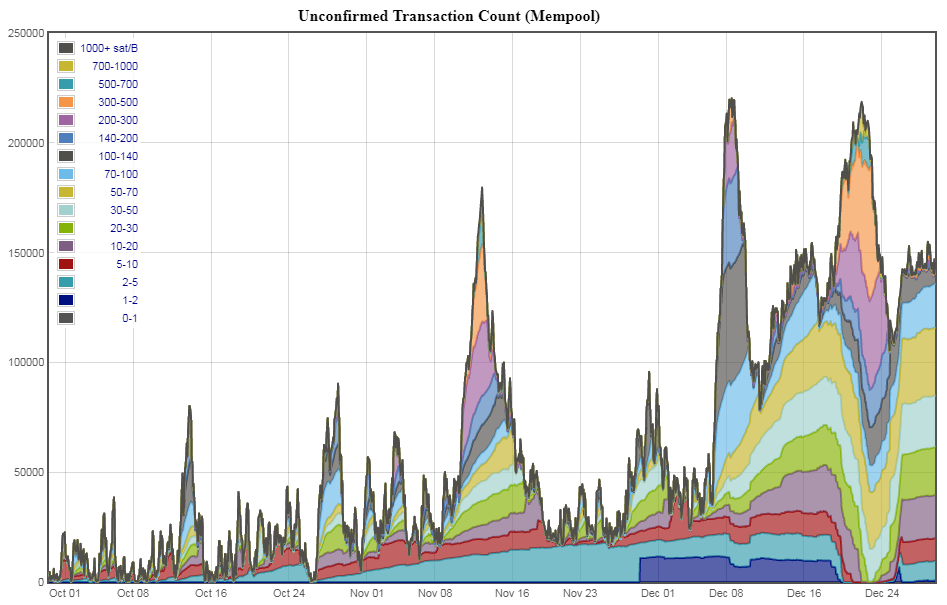 Let’s hope the Chinese bitcoin miners work hard this weekend to clear the cache while the rest of us party.

Along with Bitcoin, most of the altcoins are looking pretty tame, except ripple, which has been on a binge lately. 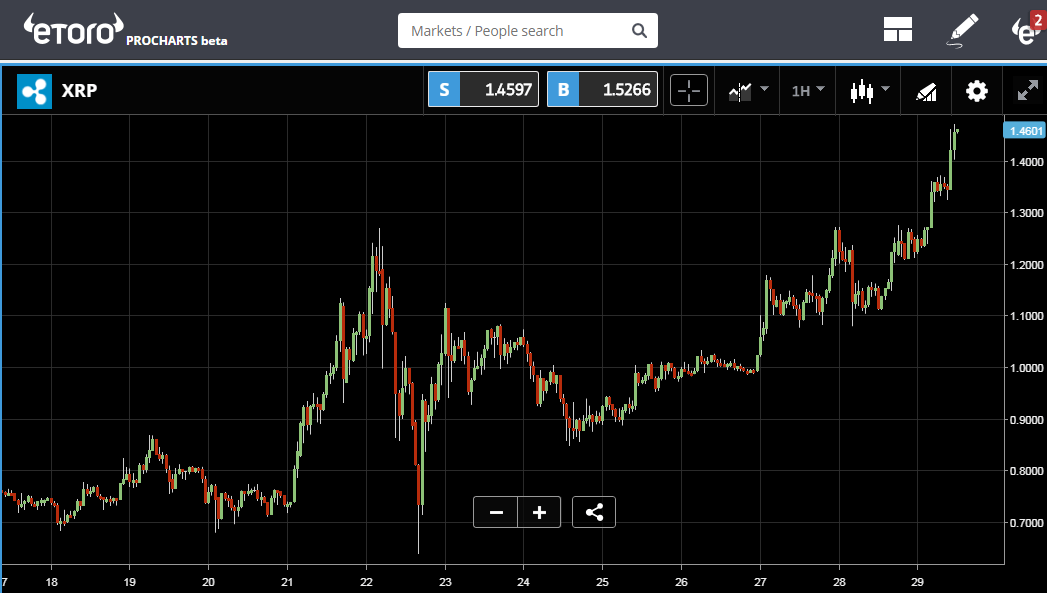 Though volumes of XRP are nowhere near what they were in the middle of the month, the liquidity in the market seems to be ample. 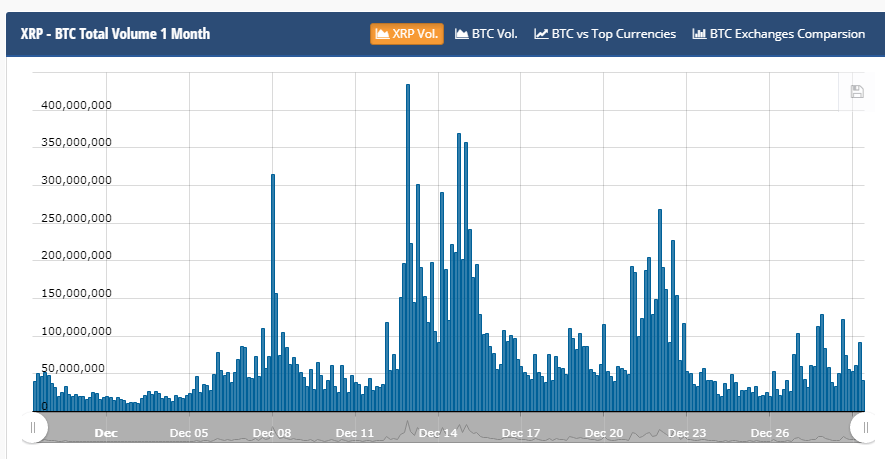 Despite the new law in South Korea, it seems that volumes there have not been hampered there too much as of yet. As well, the spread between the prices of bitcoin on the Korean exchanges Vs the price of bitcoin on western exchanges seems to be holding.

The price of BTC on the Korean exchange Bithumb is now roughly 19% above the price in eToro. So not much different from where it was a week ago.

We’ll need to continue to monitor the situation and see if there are any further updates from the Korean regulators.

Wishing you an amazing weekend and a spectacular 2018!!