The markets were risk off today as the S&P 500 had its biggest fall all year on the back of markets looking skitterish on Trump comments about North Korea. Tension has been building for some time on the issue, but in reality I think it’s a lot more than that!

Obviously war rhetoric gets the markets going and certainly when it comes to a nuclear power, at the same time though there was a lot of fundamental economic data out today which will have an impact further down the line. One of the key things was of course PPI data which missed the market by quite a bit. Coming in down -0.1% m/m (0.2% exp), which shows that the US economy is not as healthy as could be lead to believe even with the large non-farm payroll figures.

On top of this, the FEDs Dudley said that inflation may take some additional time to get to 2% and in the medium term might not make it all, which has a flow on effect for interest rates in the future. Either way the risk appetite of the market has suddenly swung back to being risk averse and this is a worrying sign.

For the S&P it’s always been bullish, but today was anything but as traders took flight and the bears came crashing home for once. This fall was the largest this year, and many are wondering if it heralds things to come – after all this is the longest period the US has gone without a recession according to recent data.

The trend line that had briefly in play was looking a little weak and the bears crashed right though driving it deep into the unknown. Tomorrow will be key for the pair to see if the bulls can come back in and engulf yesterdays candle, or if see further falls showing flight from equities.

If we look at support 2406 looks strong with the 100 day moving average helping to fight of bears, with the next level down being likely at 2353. For resistance look no further than 2484 which sits just under the 2500 mark which would certainly be a hard ask in this market. Either way tomorrow will be an important one for the S&P 500. 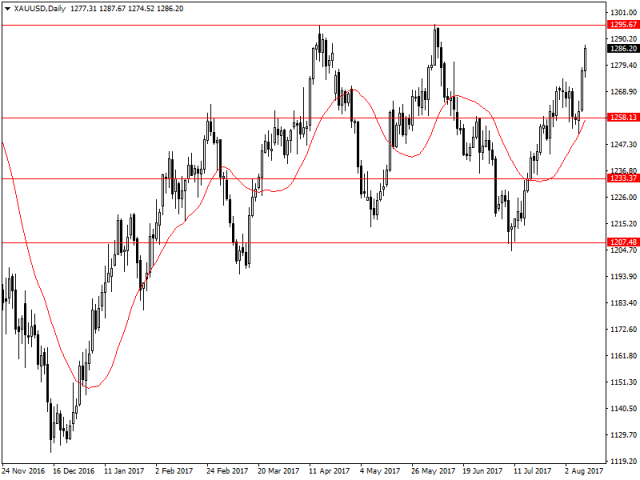 Gold is also the other major benefactor and on the charts you can clearly see that it’s making big strides on the back of risk aversity. It’s continuing its run up the charts to 1295 and if the market continues like this it may even break through.

However, we would need some dynamite in the political climate to get it all the way through resistance and eyeing up the 1300 mark. If it does fall back down to earth support is still looking strong at 1258 and 1233 and traders will be looking to target those levels when things turn south again. But for now the bulls are very much taking control of this trend.