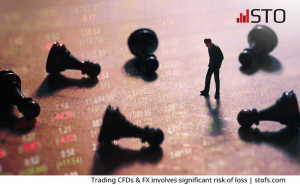 2017 was the year that the majority of the most important stock market indices hit new all-time highs. Share prices increased with investors having the opportunity to increase the value of their portfolios during 2017. Since Donald Trump was elected as President of the United States (US) on November 8th 2016, Dow Jones Industrial Average (DJIA), one of the most famous stock market indices, set 96 new record closing highs. Investors cheered as President Donald Trump had promised tax reforms, including tax cuts for businesses and job-boosting measures.

On January 26th 2018, the DJIA hit an all-time high of 26,616.71 units. Since then Dow Jones index has fallen to 24,538.98 on March 5th 2018 as investors preferred to sell shares taking into account hints that central banks around the world, such as the US Federal Reserve (Fed) and the Bank of England (BoE), are planning to increase their benchmark interest rates during 2018.

Stock market indices falling after climbing to record-highs is not something unusual. On the contrary, economists say that when stock markets fall after a long period of recording profits, a correction is taking place. A stock market correction happens when the market falls around 10 percentage points from its recent high. New investors may not be patient when a correction takes place, but the experienced ones often regard the pullback as a chance for the market to consolidate its position and prepare for the next rise.

The last stock market correction in the US markets took place on February 8th 2018. On that day, Dow Jones and the S&P500 (Standard & Poor’s 500) fell more than 10 percentage points from their recent highs recorded at the end of January 2018. The release of data regarding US wages in January 2018 by the US Department of Labour may have led investors to sell shares. The survey showed that US average earnings increased by 2.9% in January 2018, on an annualized basis, which was the best reading recorded since 2009. The figure strengthened the belief that the Fed would be pressed to raise borrowing costs in order to reduce inflationary pressures, thus ending the era of monetary easing policy.

Stock market corrections primarily affect traders who have short-term targets or those who use high leverage to execute their trading strategies. While buying on margin could increase the trader’s profits, it also comes with significant risks if the market’s movement is not favourable for the trader. A stock market correction could be one of those occasions that can inflict losses on a trader’s portfolio.

For both short-term traders and long-term investors, a stock market correction could provide opportunities regarding buying shares at a lower than usual price. Stock market corrections rarely last long. A MarketWatch survey, published on February 11th 2018, determined that the average correction lasts for fourteen calendar days. The survey was based on research on the Dow Jones index fluctuations in the period between 1945 and 2013.

STO is the trading name of AFX Markets Ltd and AFX Capital Markets Ltd which are regulated by the Financial Conduct Authority (FCA) and the Cyprus Securities and Exchanges Commision (CySEC). STO’s online trading platform allows traders to trade on the most active shares on the US, German and Italian stock markets.