The US dollar was seen weakening once again on Monday. The dollar fell against the euro as investors bid up the common currency following Draghi’s comments on Friday at the Jackson Hole symposium. Economic data was largely quiet yesterday.

Reports emerged earlier today that North Korea tested a missile which flew over Japan and landed in the sea. Investors rushed to the safe haven of the Japanese yen and gold which was seen strengthening as a result. Further reaction could be expected later in the day as the markets unfold. 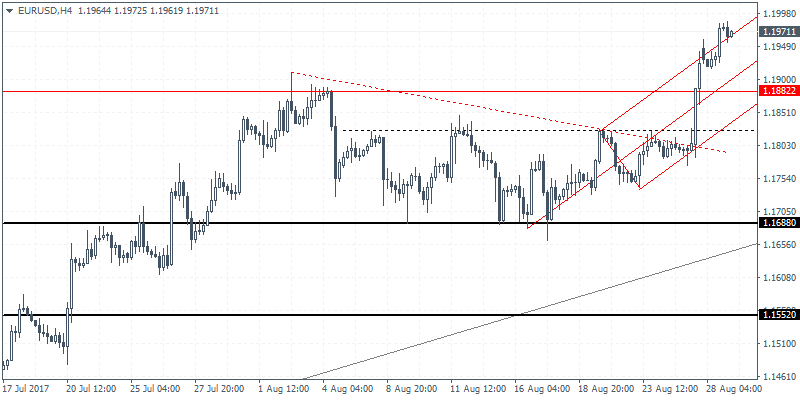 EURUSD (1.1971): The euro broke fresh highs yesterday as prices closed at 1.1977. The rebound came after a modest retracement, but price action turned bullish quite quickly.  EURUSD looks to be all set to test the $1.2000 handle in the near term. However, the risk of a short term decline could see the common currency testing the support level at 1.1882 and 1.1824 levels. The bias in the EURUSD remains strongly supported to the upside until the gap around 1.2000 will be filled. This is likely to mark the end of the bullish rally in the euro before we can expect to see some kind of a pullback in prices. 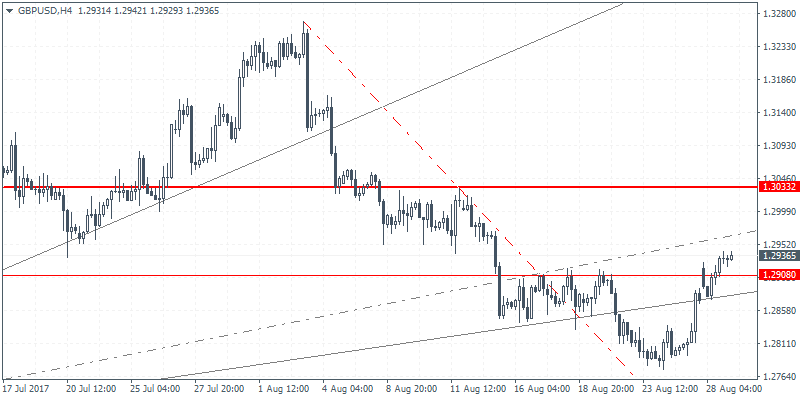 GBPUSD (1.2936): The British pound was seen posting gains for a second consecutive day. Price action gapped higher on yesterday’s open but briefly pulled back to test Friday’s close. Further upside is expected in the cable which could now be heading towards the resistance level of 1.3033. With the resistance level of 1.2908 being cleared, any pullback is likely to be limited at this level. A retest of support at 1.2908 will confirm the upside towards 1.3033 level. However, in the event that the support at 1.2908 fails to contain prices we could expect to see some near-term downside.

Above article was provided by Orbex – Serving Traders Responsibly. Check the trading conditions and open your own account.

The Latest News covering forex, commodities, and indices in addition to exclusive CFD and forex trading opportunities identified by the Orbex research team 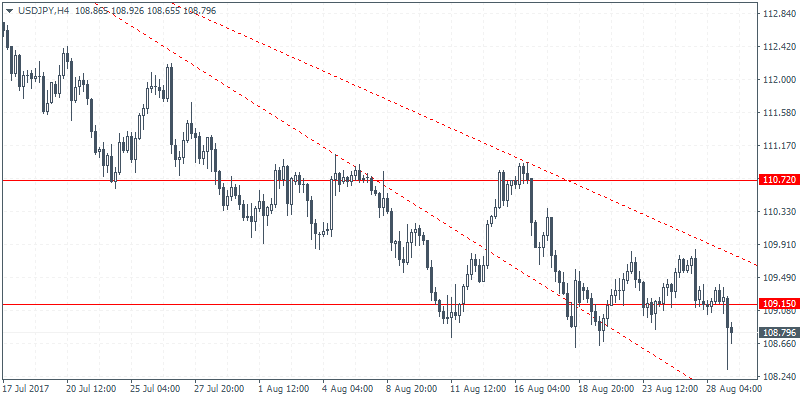 USDJPY (108.79): The USDJPY slipped past 109.15 support earlier today. The declines came on the news report of the North Korea’s missile launch. The price fell to lows of 108.32 before pulling back. The breakdown below 109.15 could, however, suggest further declines in USDJPY. A retest of 109.15 as resistance could confirm this move as the next support near 108.00 could be inevitably tested. However, the fact that USDJPY has been strongly consolidating near 109.15 – 108.20 levels could suggest a near-term bottoming pattern being formed.