The well-orchestrated hawkish remarks by a chorus of central bank heavyweights this week have punished global stocks with speculation mounting over whether the era of cheap money is soon coming to an end. Asian shares concluded mostly lower on Friday, despite China’s Manufacturing PMI exceeding original estimates, while European shares were a mixed bag amidst cautious trading. With investor anxiety rising over historically low interest rates and central bank bond buying potentially coming to an end, Wall Street could come under further pressure this afternoon. This has been an extremely lively week dictated by central bankers and unexpected surprises, with participants likely using the weekend to mull over the events that have occurred.

The increasingly hawkish comments from central banks outside of the US have eroded the Greenback’s allure with the Dollar Index sinking towards 95.50 during Friday’s trading session. Investors seem to be keeping a safe distance from the Dollar amid signs of decelerating growth in the US while political instability in Washington continues to raise questions over Trump’s ability to move forward with his pro-growth agenda. Although economic activity in the US grew more than expected in Q1 at 1.4%, this did little to quell a painful selloff of prices. The technical view suggests that the Dollar Index remains heavily bearish on the daily charts with repeated weakness below 95.50 opening a path towards 94.00.

Sterling was under noticeable pressure on Friday following reports that consumer confidence in the UK has fallen to its lowest level since just after the Brexit vote in June 2016. The latest figures from the Office for National Statistics (ONS) illustrated a gloomy picture for consumers as the terrible combination of higher prices and sluggish wage growth squeezed household budgets. While the lingering impact of Bank of England Governor Mark Carney’s hawkish comments made earlier this week may support Sterling in the short term, I feel the upside remains limited in the longer term as investors come to grips with the realities of Brexit.

From a technical standpoint, Sterling is undeniably bullish on the daily charts with buyers in firm control above 1.2775. A technical correction could be on the cards with the formation of a new higher lower creating a stepping stone for bulls to attack the 1.3000 resistance once again. 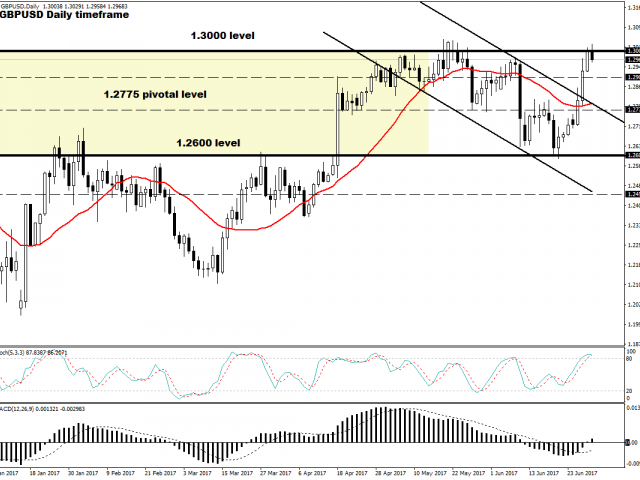 WTI Crude popped higher during Friday’s trading session on the back a decline in weekly US crude production and Dollar weakness, but the bias still remains heavily bearish amid oversupply fears.  Oil has remained extremely pressured due to the high global crude inventories, therefore any appreciation in prices may be treated as a technical bounce for sellers to drive the commodity lower. As oil continues to find comfort at depressed levels despite OPEC’s efforts to stabilize the markets, questions have been raised about whether OPEC will introduce further output cuts to reduce the global glut and ultimately prop prices higher. I feel that OPEC’s apparent reluctance to do this may give permission to sellers to attack the commodity further.

Gold was pressured below $1255 this week despite the Dollar extending its losses and equities falling. Generally speaking, a vulnerable US Dollar and depressed stock markets would have the ability to support the yellow metal, however in this case it seems that the prospect of tighter global monetary policy has inspired bears to make a move. With hawkish comments this week from central bank heavyweights sparking speculation that the era of cheap money is coming to an end, Gold may struggle to maintain its ground in the short term. As the Brexit woes, political uncertainty in Washington and concerns over oil’s oversupply trigger risk aversion, safe haven assets such as Gold are likely to remain supported in the longer term. 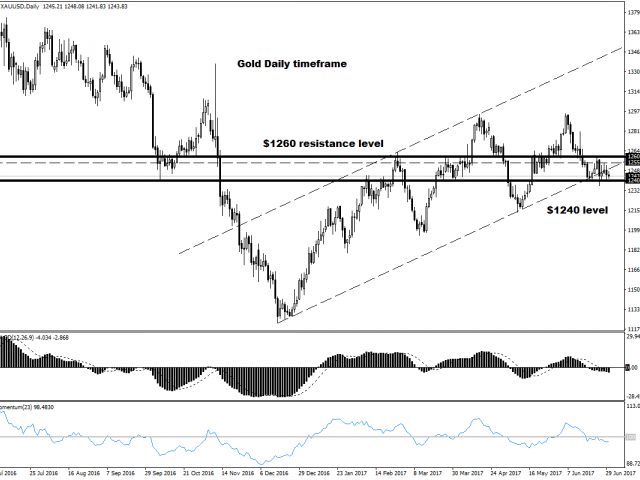