The US dollar index often called USDX or DXY is an indicator reflecting the strength of the USD. Established in 1973, its initial value was set at 100. Since then, its maximum was at the level of 150 in February 1985, while the minimum was reached in March 2008.

The construction of the dollar index 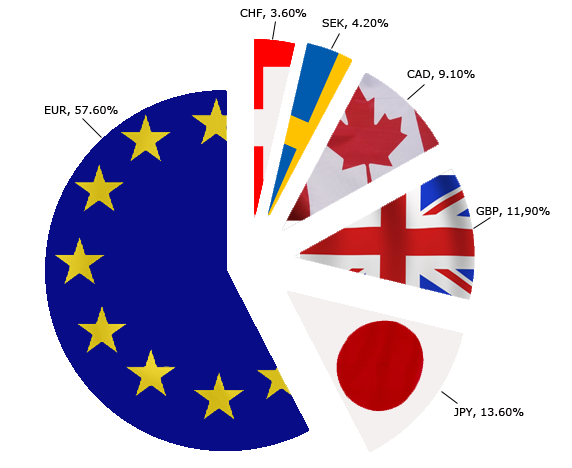 The euro has the highest weight in the dollar index, which share is 57 percent. The next currency is Japanese yen with a 13 percent share and the British pound with 11 percent. The weight of the next three currencies is approximately 17 percent of the entire basket.

The weights of particular currencies were selected based on commercial exchange, although this is not a perfect way. The currency of the common currency alone is 57 percent, so ultimately it can alone determine the trend in the dollar index. Despite this fact, it is worth looking at the USD index because it may indicate current trends on the currency market.

The current situation on DXY

When I last wrote about DXY on August 10, we observed strong growth and the establishment of new maxima, and 15.08 the index reached the level of 97.05, which so far is the maximum of this year. Since the establishment of the said maximum, the index began to decline and is currently at the level of 94.07. The graph shows a characteristic Head and Shoulders formation with a clearly defined shoulder line at the level of 95.68 and an oblique neck line, which is also a short-term upward trend line. It seems that breaking this line may lead to further declines in the index, and thus the weakening of the dollar in relation to other currencies from the “basket”.

Of course, the main impact on exchange rates have politics and macroeconomic events, and here I would expect information influencing dollar exchange rate against other currencies. The main topic of the coming days will be discussions on US-China tariffs and their impact on trade relations between these countries. The news from the UK regarding Brexit and the conditions under which the “divorce” from the EU will have place are often contradictory and have a huge impact on the behaviour of GBP and EUR. The H&S formation can only suggest a weakening of the dollar in the near future, but the macro information will be the ones deciding what will happen with USD.